Turkey will be cleaned of terrorists, PM Davutoğlu says 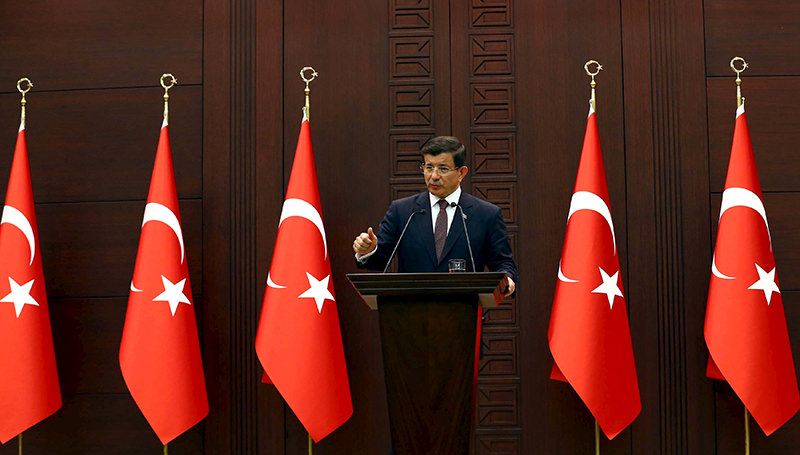 | Reuters Photo
by Daily Sabah with AA Sep 08, 2015 12:00 am
Turkey will be "cleaned of terrorists no matter what happens," Prime Minister Ahmet Davutoğlu said on Monday, following the latest terrorist attack against Turkish security forces which killed 16 soldiers in Hakkari's Dağlıca district.

Speaking at a news conference in Ankara the day after one of the deadliest attacks by PKK terrorists since the PKK called off the ceasefire and re-launched a terrorist campaign at the end of July, Davutoğlu said: "These Mountains will be cleaned of terrorists. They will be cleaned whatever the cost may be."

"The mountains, plains, plateaus and cities of this country will not be abandoned to the terrorists."

Davutoğlu said the soldiers were initially fired on before being targeted with explosives.

The Turkish military said earlier the patrol was clearing road between Dağlıca to Yuksekova in the southeastern province of Hakkari on Sunday evening when they were attacked with improvised roadside devices as two armored vehicles passed.

Six other soldiers were injured in the attack.

Davutoğlu said Turkish security forces had taken the control of the area around the highway and evacuated the casualties.

The army began operations around Yüksekova on Sept. 2.

"The goal is clear -- to establish public order and the dominance of legitimate security forces in every corner and every centimeter of Turkey," Davutoğlu said.

The renewal of fighting between the PKK and Turkish security forces marked the end of the fragile two-and-a-half year lull to fighting as the reconciliation process sought to end the 30-year conflict.

Since July, more than 90 members of the security forces have been killed.

Davutoğlu said that since the June 7 general election Turkey had faced terrorist attacks supported from outside and within the country.

He said that since July 24, when Turkey launched airstrikes on PKK camps in Turkey and northern Iraq, the security forces had been instructed to "complete the liquidation of terrorist organizations, no matter where in Turkey they are or from which evil outbreak they are fed."

The fight against terrorism would continue despite the election rerun scheduled for Nov. 1, Davutoğlu added.

"We are going to continue the fight against terror but the elections on Nov. 1 are going to be held in normal, legal and democratic conditions."