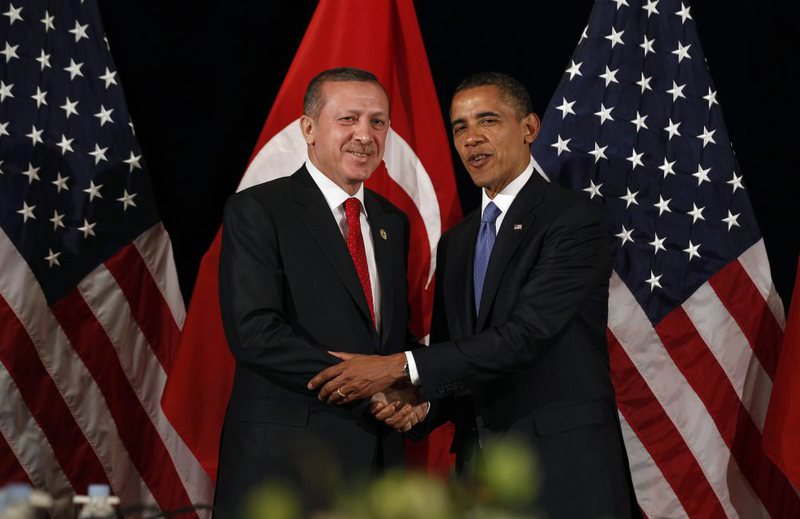 U.S. President Barack Obama shakes hands with then prime minister and current President Recep Tayyip Erdou011fan after a bilateral meeting in Seoul on March 25, 2012.
by Daily Sabah Sep 11, 2015 12:00 am

Following Turkey joining the U.S.-led airstrikes against ISIS and striking a blow to them, the terrorist organization continues to target the country in its magazine Dabiq under the pretext of Ankara serving the ‘crusader' NATO alliance

The English-language online magazine of ISIS, Dabiq, issued its 11th edition, with President Recep Tayyip Erdoğan speaking to United States President Barack Obama on the cover. In the magazine's cover article, "the crusader coalition involved in the war against the Islamic State" is heavily railed, implying the coalition conducts the fight against the terrorist organization. "Turkey is a member of the crusader NATO alliance. It took part in various crusader campaigns launched and led by the Americans," the article recited and further accused the Turkish army of apostasy for serving the defense of "the crusader NATO alliance."

The name of the magazine, Dabiq, refers to a term in the Islamic eschatology as one of the two possible locations for an epic battle between Muslims and Christians that will result in a Muslim victory and mark the beginning of the end of the world. The terrorist organization uses the term as the symbol of their fight against the West.

At the beginning of September, a pro-ISIS social media account issued a death warrant for Erdoğan, due to Turkey's cooperation with the U.S.-led coalition to fight against ISIS. Declared as an "apostate" for supporting and collaborating with the U.S.-led counter-terror coalition after Turkish jets targeted ISIS positions in Syria and northern Iraq, Erdoğan was sentenced to death in the so-called fatwa published on the social media account. Being accused of acting in unison with Arab Alawites and Jews, the text went on that Erdoğan had shed Muslim blood. If Erdoğan repents from supporting the coalition, then the president's death warrant will be revoked, the text claimed. Giving examples from the history of Islam and Hadiths, the text stated that ISIS will "declare war on every country and/or army that threatens the 'Islamic State'."

ISIS also released a video calling on Turkish people to "conquer Istanbul and Turkey from the ones who cooperate with the West," while referring to President Erdoğan as a "Satan" who allegedly sold the country to the U.S. and Western powers and harshly criticized him for supporting the U.S.-led coalition against ISIS. Speaking in Turkish, the unidentified ISIS terrorist says that it is necessary for the people of Turkey to rebel against the "atheists, crusaders and 'Satans' who fool them and make them a slave to the crusaders" before it is too late. "You first need to repent from all the reasons – which are caused by this treacherous Satan (Erdoğan) and his friends - that bother you," said the militant and added that, "Turkish people should refuse to accept democracy, secularism, human laws, and all types of other evils. "Those who believe in the fight in the way of God, while disbelievers fight in the way of Satan," the terrorist said and added that, "Whoever follows the path of Atatürk and disregards Sharia allegedly becomes Satan themselves by befriending the Crusaders, ap

The terrorist urged Turkish people to join the side of ISIS and fight against the Turkish state, which he claimed was ruled by Satan (President Erdoğan) and democracy.
RELATED TOPICS