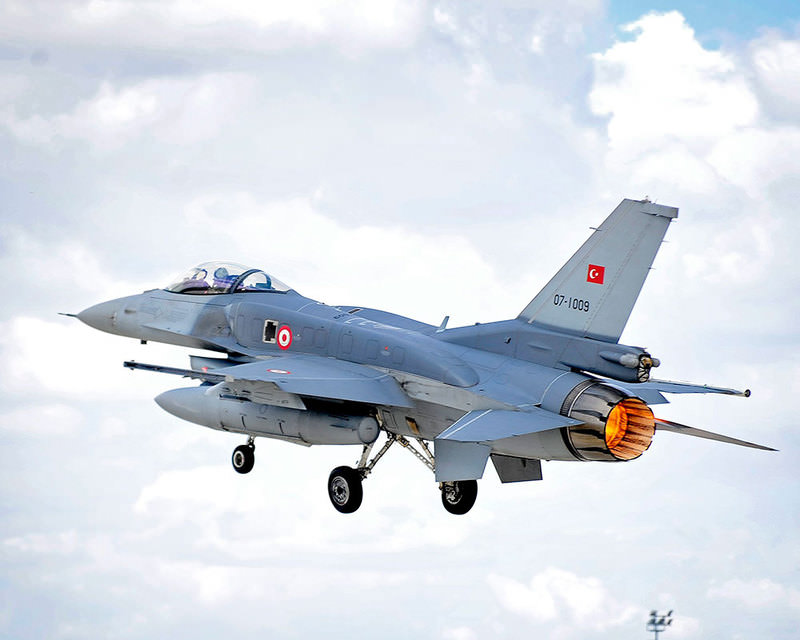 by Ragıp Soylu Sep 13, 2015 12:00 am
A Turkish official document viewed by Daily Sabah showed that Turkish jets hit Islamic State of Iraq and al-Sham (ISIS) strongholds in Raqqa, Deir ez-Zor and Suran in Syria as part of the international coalition while in the midst of a bloody war with separatist PKK terrorists.

The data showed that since the Turkey's official integration to anti-ISIS coalition forces between Aug. 28 and Sept. 3, the strikes have hit ISIS hideouts in three different military operations and destroyed 12 targets in Syria. The Turkish Air Force used F-16 and F-4 jets in the operations and did not conduct reconnaissance flights.

It is claimed before that Ankara had opened air bases to the U.S.-led coalition as lip service to the United States in return for U.S. consent for Ankara's military operations against the PKK. The document disapproves this claim with clear evidence. U.S. officials refused to acknowledge the details of the Turkish airstrikes before.

Last week, the chief of staff of the anti-ISIS coalition, Marine Corps Brigadier Gen. Kevin J. Killea welcomed Turkey's military operations against ISIS and said the Turkish strikes had significantly broadened the coalition's capabilities along with the Turkish bases that also increase flexibility in targeting the area overall.

İncirlik Air Base in Adana has become an essential military post for the coalition to hit ISIS positions in Syria. A number of reports also underlined the increased reconnaissance flights flying from the base, especially by drones.

Reports in the U.S. and Turkey earlier this summer said Ankara sealed the deal with Washington on the condition of establishing an ISIS-free zone in northern Syria and increased cooperation between the coalition and Syrian rebels against ISIS. As a clear sign of progress on this front, coalition forces targeted ISIS attack units in the Syrian city of Mare where ISIS advances had encircled Syrian rebel groups between Aug. 31 and Sept. 4 with more than 13 strikes.

Foreign Ministry spokesman Tanju Bilgiç said last week that Turkey will continue to work with the U.S. to combat ISIS. A ministry official claimed that 20,000 people have been banned from crossing the Syrian border in an effort to prevent foreign fighters from entering Syria through Turkey. In late June the official number for those deported by Turkish authorities was 1,350. The Foreign Ministry announced on Wednesday that the number has now reached 2,100. In addition, officials said that through risk analysis systems designed to spot potential foreign fighters at airports, more than 1,400 people have been banned from Turkey.