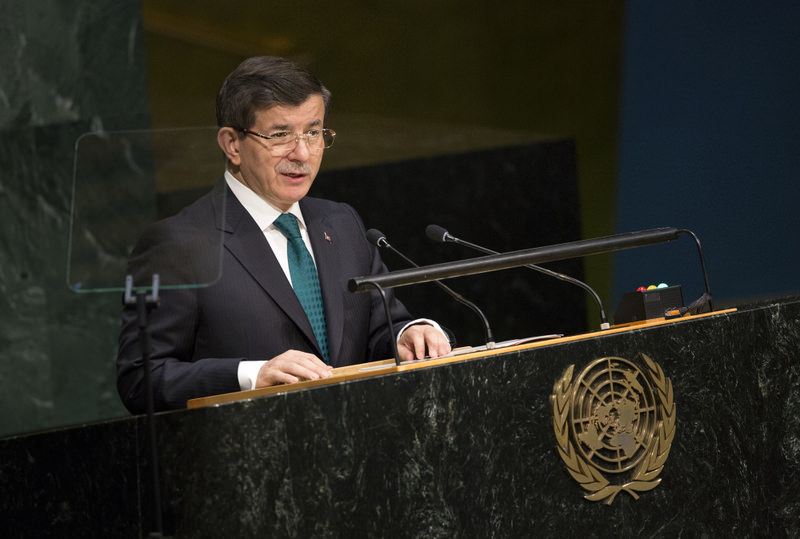 During his speech at the U.N. General Assembly on Sunday, PM Davutoğlu said the U.N.'s goals to combat poverty, inequality and climate change cannot be realized without peace and security. He singled out Syria as an example of a humanitarian tragedy caused by a lack of security and stability in the Middle East, resulting in Europe's largest refugee crisis since World War II

On Friday the U.N. adopted an ambitious set of development goals to end poverty, fight social inequality and fix climate change by 2030. Davutoğlu singled out Syria as an example of a humanitarian tragedy caused by a lack of security and stability in the Middle East, resulting in Europe's largest refugee crisis since World War II.

The civil war in Syria has claimed more than 250,000 lives since 2011 and created a security vacuum that has paved the way for extremist groups such as ISIS to gain a foothold in the region. The U.N. refugee agency says 95 percent of the last million Syrian refugees have gone to Turkey, which now hosts more refugees than any other country in the world. Davutoğlu said Turkey had spent almost $8 million on the refugees it hosts while receiving very little contribution from the international community.

"We cannot reach our sustainable development goals without first addressing complex humanitarian emergencies," he said. "That is why a stronger emphasis on humanitarian development is strongly needed," the prime minister added.

"That is why Turkish humanitarian diplomacy combines humanitarian and development assistance programs within a collective strategy, particularly towards countries in sub-Saharan Africa."

Turkey is to hold the World Humanitarian Summit in May next year that will seek to find new ways to tackle the world's humanitarian needs.

Davutoğlu said the U.N. needed to engineer a "paradigm shift" to unlock the resources needed to fund sustainable development goals.

Also on Sunday, Davutoğlu met with representatives of the Turkish community in the U.S., where he said that a "war of perceptions" is being carried out on Turkey through false information and propaganda disseminated by international actors. "There are terrorist acts against Turkey at home, but there is also another form of terrorism against it from abroad, which is terrorism via perception operations," he said.

"This perception terrorism is as dangerous as armed terrorism inside and it is taking on the future of Turkey," Davutoglu said.

Davutoglu singled out false allegations laid against the Turkish government because of the country's stance on the Palestinian and Syrian conflicts as examples of the "war of perceptions" – manipulation of how Turkey is viewed at home and globally – being waged on Ankara.

Urging Turkish citizens in the U.S. to defend their country of origin against such operations, he said "Another request of ours from you is that you open your hearts to all people whose hearts beat with Turkey and not to become introverted. There is now a Somali Diaspora that defends Turkey in every occasion," adding that Turkey has defended the causes of oppressed peoples such as Somalis, Palestinians, Syrians, Egyptians, Bosnians, Albanians and Crimean Tatars on every international platform.

Prime Minister Ahmet Davutoğlu met with Iranian President Hassan Rouhani in New York on Sunday to discuss bilateral relations as well as the regional conflicts in Syria, Yemen and Iraq. The closed-door meeting at U.N. headquarters was held on the sidelines of the 70th U.N. General Assembly. The leaders agreed to deepen economic ties and continue dialogue on regional conflicts in Syria, Yemen and Iraq, despite disagreements on a range of issues, according to Prime Ministry sources.

Turkey and Iran have been pursuing different policies about the regional crisis: Iran strongly backs Syrian President Assad while Turkey has called on him to step down and has condemned his crackdown on opposition groups.

The two countries also differ on the situation in Iraq and the crisis in Yemen. Ankara has voiced its concerns over the presence of Iranian commanders in Iraq leading Iraqi security forces as well as Iranian-backed Houthi Shiite militias, which have frequently been accused by the U.S., rights groups and Sunni groups of targeting innocent Sunnis.