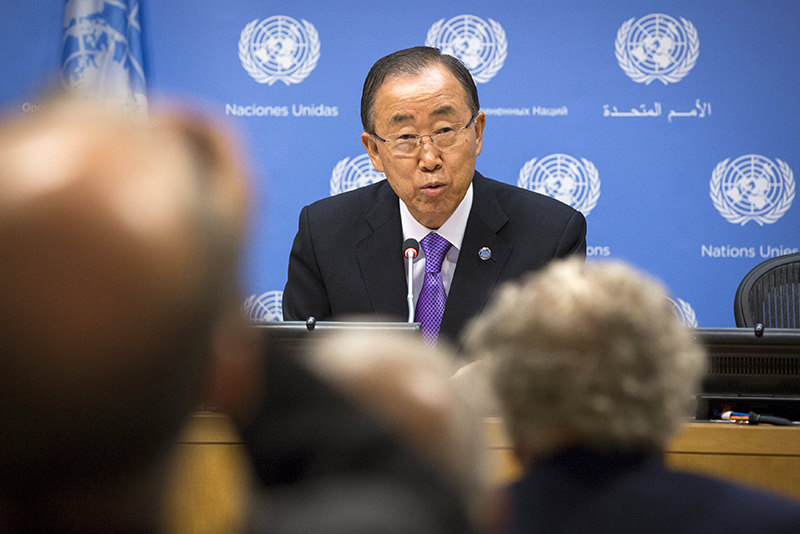 Ban and Davutoğlu met on the sidelines of the 70th U.N. General Assembly in New York, the U.N. spokesperson's office said in a statement.

"The secretary-general warmly thanked the prime minister for his country's very generous support to the huge influx of refugees from Syria," read the statement.

A four-and-a-half year civil war in Syria has claimed more than 250,000 lives and made the country the world's single-largest source of refugees and displaced people.

The U.N. refugee agency says 95 percent of the latest million Syrian refugees have gone to Turkey, which has become the world's largest refugee-hosting country. It is home to more than 2 million registered Syrian refugees.

Ban and Davutoğlu also discussed at length the situation in Syria and Iraq, including international efforts to counter the threat posed by the Islamic State of Iraq and al-Sham (ISIS) and move toward a political solution to the Syrian conflict, according to the U.N. statement.

During the meeting, which was closed to media, the U.N. chief expressed condolences to Turkey for recent terrorist attacks that have killed 130 security forces since July 7.

"The secretary-general and the prime minister agreed on the importance of the negotiations for a comprehensive settlement in Cyprus, as well as Turkey's role in supporting the process," the U.N. said.

Since the collapse of the joint government in 1963, Turkish Cypriots and Greek Cypriots have sought a comprehensive settlement to renew their partnership. Negotiations between the two sides to settle the decades-long conflict resumed in May after a seven-month pause.

Ban and Davutoğlu "also discussed developments related to the Middle East Peace Process, especially the current need to keep tensions down in Jerusalem", the U.N. said.

Meanwhile it is reported that Turkish coast guards have found the remains of 30 people and rescued just over 3,500 refugees from the Aegean Sea over the last 10 days, as local government sources have claimed.

The İzmir Governorship released data on Monday claiming that the authorities carried out 134 search-and-rescue operations between Sept. 18 and Sept. 28.

The governorship added that eight human traffickers had been detained during the operations.

Overall, 54,255 refugees have been rescued from Aegean waters while 116 bodies have been found and 69 human traffickers arrested since January 1 this year, the statement added.

The Syrian civil war that gave rise to a refugee problem has become an acute issue since Sept. 2, when a dozen Syrian refugees, including eight children, drowned after their boat sank en route to Greece.

The image of three-year-old Syrian toddler Aylan Kurdi, whose lifeless body washed up on a Turkish beach, caused worldwide shock at the fate of the desperate refugees.