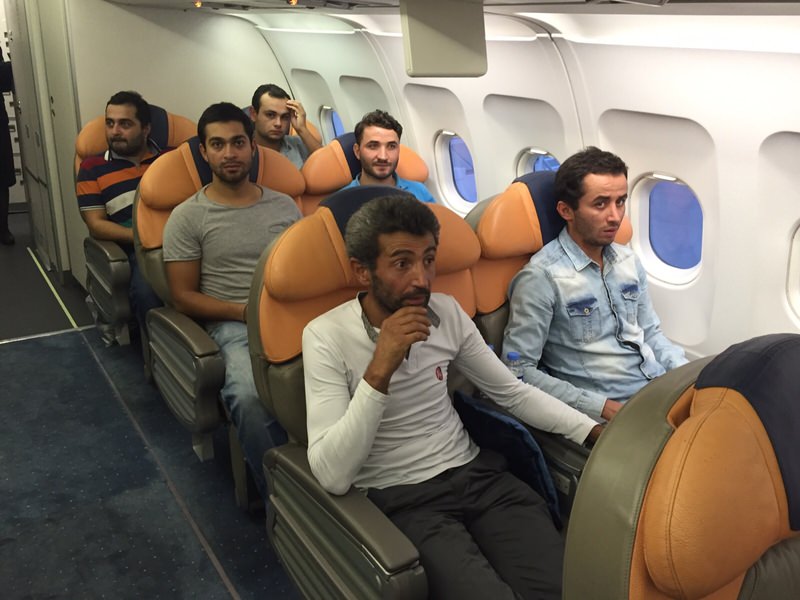 by Anadolu Agency Sep 30, 2015 12:00 am
Sixteen Turkish workers, who were held captive by an armed Shia group earlier this month in the Iraqi capital Baghdad, have arrived in Turkish capital Ankara after their release.

The plane carrying sixteen workers landed at Esenboğa International Airport in Ankara on late Wednesday and will be hosted by Turkish President Recep Tayyip Erdoğan in Presidential Palace.

Turkish Prime Minister Ahmet Davutoğlu said Wednesday there were no concerns over the workers' health condition.

In total, 18 Turkish workers were kidnapped earlier this month in a Baghdad suburb by an armed Shia group. Two of them, Necdet Yılmaz and Ercan Özpilavcı, were released on September 17.

According to a source at the Turkish Presidency, Erdoğan gave instructions to bring the 16 freed Turkish workers back to Turkey aboard the prime ministrial plane"ANA".

Earlier, Ambassador Faruk Kaymakçı had accompanied the released workers in a car from southern Iraq's Basra region to the Turkish Embassy in Baghdad.

All the abducted Turkish workers were employees of Nurol Holding, a Turkish construction firm that is currently carrying out developmental projects in the Iraqi capital.

Earlier this month, a video appeared online showing the 18 abductees kneeling before five masked men brandishing guns. In the video, the abductees -- who include three engineers and an accountant -- gave their names and the names of their hometowns in Turkey.
Last Update: Sep 30, 2015 9:49 pm
RELATED TOPICS