Turkey's unmatched support for survivors of the Syrian civil war 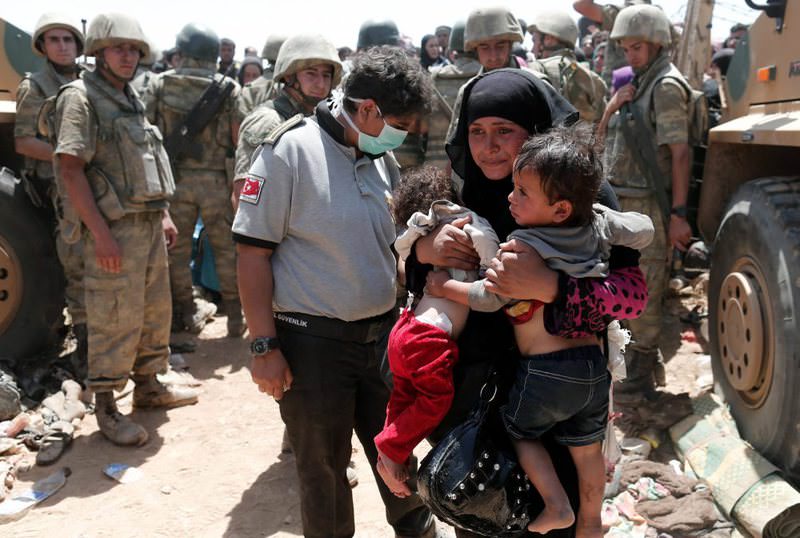 Since the outbreak of the devastating Syrian civil war, Turkey has been the first port of call for millions of desperate men, women and children forced to abandon their homes, jobs, schools and families.

In the face of a worsening conflict, Ankara made the vital decision to open its frontier to Syrian people who were gathering in increasing numbers at wire fences on Turkey's southern border – a move dubbed the "open-door policy."Turkey's government – and many ordinary citizens – rushed to lend a helping hand to their one-time neighbors, now guests. Around 500 Syrian people first entered Turkey from Hatay's Yayladağı district on April 29, 2011.

A serious rise in refugee numbers was seen that June, when the Syrian town of Jisr al-Shughour – with a population of 41,000 – largely emptied ahead of a regime offensive. The number of refugees coming to Turkey was no longer measured in their hundreds, but thousands.

Since then, the Prime Ministry tasked its Disaster and Emergency Management Authority (AFAD) with overseeing the humanitarian aid effort. AFAD now coordinates all services to meet the basic needs of Syrian refugees in coordination with the Turkish Red Crescent.

With the increasing number of Syrian people seeking shelter in Turkey, Ankara moved to establish accommodation camps to host the refugees in a location where it could also offer food, clothing and healthcare.

As the bloody war rages, the number of Syrian refugees registered in Turkey alone has surpassed 2.2 million.

This has put Turkey among those countries hosting the world's largest numbers of people fleeing war, according to the U.N.High Commissioner for Refugees.

As of Sept. 28, 2015, a total of 258,974 Syrian refugees have been sheltered in 25 temporary accommodation centers, including tent cities and container cities across 10 Turkish provinces, built by AFAD.

AFAD also sends allowances, which have already reached the sum of 3.47 billion Turkish liras [$1.14 billion], to provincial authorities where camps are located.

Active in healthcare and food efforts at the camps, Turkish Red Crescent teams put up tents for social activities and prayer; they also provide psychological support for the refugees.

EducationSeparated from their homes, Syrian refugee children are provided with schooling both in classrooms built in the camps and at public institutions.

According to the latest figures from the AFAD, there are a total of 78,425 Syrian pupils at refugee accommodation centers.

Outside the camps, there are a total of 150,000 Syrian pupils aged between 6-12 attending schools across Turkey, mainly in those provinces hosting the largest populations of Syrian people.

They receive education under supervisors appointed by the Turkish Ministry of National Education.

Turkey also organizes training for Syrian adults at the camps, such as vocational, literacy and computer courses.

A total of 62,000 refugees have attended these courses up to now while 14,000 others are still continuing their education.

More than 75,000 Syrian children have participated in a two-year UNICEF education project, jointly conducted with AFAD, the Ministry of National Education and the Turkish Red Crescent, with financial support from the EU.

Since 2011, Turkey has spent $7.6 billion on refugee aid overall; around $5.6 billion of this figure is for Syrian refugees, latest AFAD figures state.

According to the Turkish Prime Ministry's Office of Public Diplomacy, the amount of financial support Turkey has received from U.N. institutions is $304 million while EU countries contributed only $1.5 million to date as of late September.

The civil war in Syria has claimed more than 250,000 lives and made the country the world's single-largest source of refugees and displaced people.

According to the UNHCR's July data, the number of refugees fleeing the conflict to neighboring countries has passed the four-million mark.

"New arrivals in Turkey and updated data from the Turkish authorities on refugees already in that country have taken the total number of Syrian refugees in neighboring countries to more than 4,013,000 people," the agency said in a statement.

The U.N. expects this figure will reach around 4.27 million by the end of this year.

At least an additional 7.6 million people are displaced inside Syria.