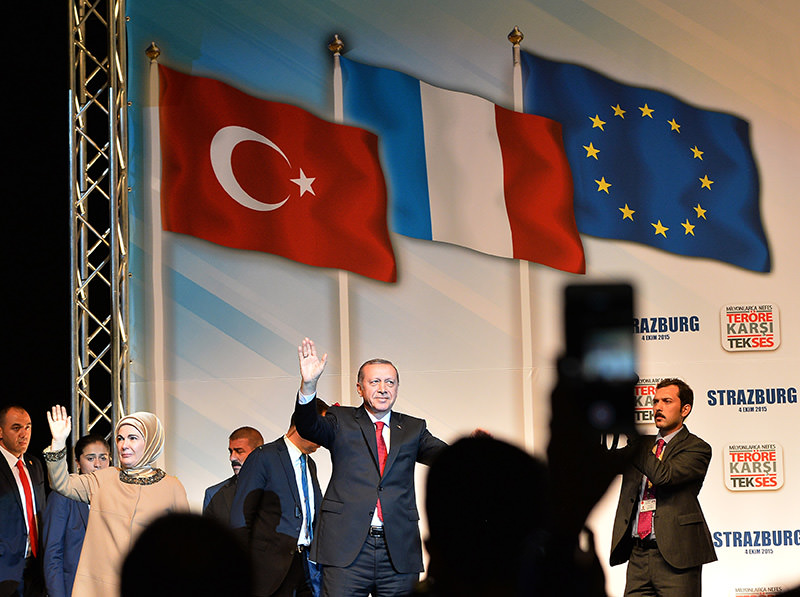 | AA Photo
by daily sabah
Oct 04, 2015 12:00 am
President Recep Tayyip Erdoğan arrived in France on Sunday to address Turkish supporters at a meeting entitled 'One voice against Terror'.

President Erdoğan stated to the large crowd that those who eat, drink from Turkey and then attack the unity of the country will never be forgiven. He was referring to the members of the PKK terrorist group who has recently continued an onslaught of attacks in Turkey, particularly in the eastern region of the country.

"We are fighting terrorism, not our brothers living in the region, we are united as one," the president of Turkey said in the meeting which took place in the French city of Strasbourg.

The president addressed the youth living abroad as he advised those living in France to have goals but never to forget their roots, culture, beliefs and mother tongue.

"You will end terrorism at the voting booth," President Erdoğan said as the early elections are nearing in Turkey.

The president also touched upon the Syrian crisis and Turkey's ongoing role to accommodate millions of refugees in the country. He criticized European countries for its inaction to help the Syrian refugees, advising them not to "close their eyes" to the tragedy.

"Turkey has given a lesson in humanity to Europe and the whole world," Erdoğan said.

Turkey's Supreme Election Board (YSK) had earlier announced that Turkish citizens living abroad will be able to start voting on October 8, almost a month before the date those living on Turkish soil will vote on November 1.

The country's top election board stated that it has completed its election schedule, and will enable Turkish citizens living abroad to cast their ballots once again, which will take place from October 8 to 25.

The YSK had also noted that the ballots will be sealed and transported to Turkey by diplomatic couriers, and will be counted when all the ballots are opened in the country after the elections are over.