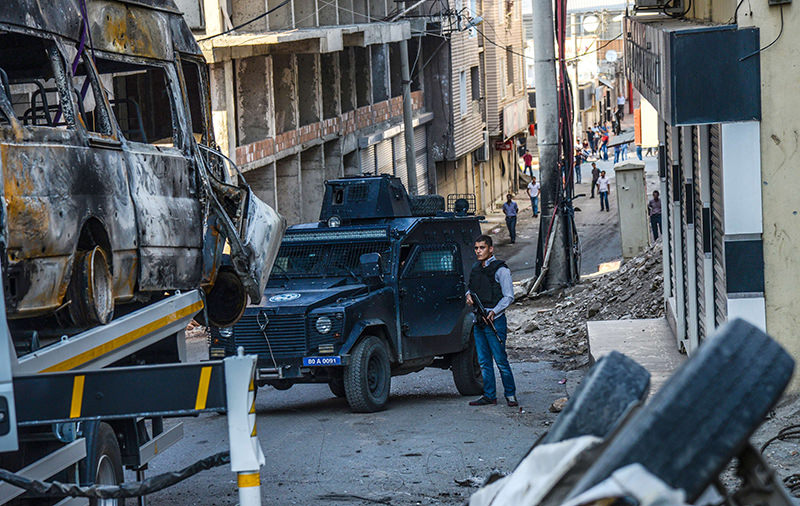 A picture taken on October 5, 2015 shows destroyed vehicles as a Turkish police officer guards a street in Silvan, after clashes between Turkish army and PKK terrorists (AFP Photo)
by Daily Sabah Oct 06, 2015 12:00 am
The Republican People's Party's (CHP) district head Abdülmenaf Manaz has protested the curfew imposed in southeastern Silvan district of Diyarbakır province and said on Tuesday that he would 'join the PKK terrorists in the mountains if he was not old.'

Speaking on a live radio show, Manaz criticized the curfew, which had started on Oct. 3 to carry out operations against PKK terrorists in the district to ensure public security, and said he has 12 children and would not hesitate to join the terrorists in the mountains if he was not old.

The CHP district head claimed the situation in Silvan was 'worse than the 1990s', when PKK violence was at its peak.

The curfew in the Silvan district ended on Monday evening, said the governorship.

The governorship of the Diyarbakır province stated that the curfew which began on Friday Oct. 2, in the morning, has been lifted on Oct. 5, Monday at 5.30 p.m. (1430GMT).

Renewed violence in Turkey has come in the wake of the July 20 Suruç massacre, blamed on ISIS. The subsequent PKK-linked murder of two Turkish police officers at their home sparked a new wave of conflict.

The fighting has seen the collapse of a fragile cease-fire which began early 2013 and was dubbed the "reconciliation process".

Founded in the late 1978, the PKK is considered a terrorist organization by Turkey, the EU and the U.S.

CHP was criticized for entrusting votes to the Peoples' Democratic Party (HDP) so that the latter could pass the election threshold in the June 7 general elections.

However, the party has underscored many times that they have no votes to give to the HDP anymore, since it had already passed the threshold.