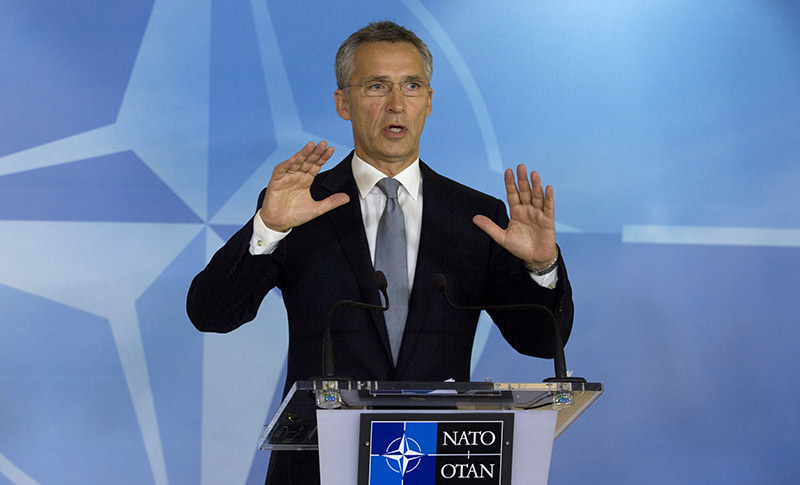 NATO Secretary General Jens Stoltenberg speaks during a media conference at NATO headquarters in Brussels on Thursday, Oct. 8, 2015 (AP Photo)
by Daily Sabah with Agencies Oct 08, 2015 12:00 am
NATO is ready to send troops to Turkey to defend its ally against threats on its southern flank, the head of the U.S.-led alliance said on Thursday after violations of Turkish airspace by Russia jets conducting air strikes in Syria.

"NATO is ready and able to defend all allies, including Turkey against any threats," Jens Stoltenberg told reporters before a meeting of NATO defence ministers in Brussels that will be dominated by the Syria crisis.

"NATO has already responded by increasing our capacity, our ability, our preparedness to deploy forces including to the south, including in Turkey," he said, noting that Russia's air and cruise missile strikes were "reasons for concern".

He also said no decision had been taken on NATO troop levels in Afghanistan.

NATO denounced Russia in a statement on Monday for violating Turkish airspace along the frontier with Syria, while NATO ambassadors told Russia to halt its incursions into Turkey's airspace saying the violations were both 'extremely dangerous' and 'irresponsible'.

In a second incident, the Turkish military said a MiG-29 fighter jet - an aircraft used both by Russia and Syria's own air force - had harassed two of its F-16s by locking its radar on to them on Sunday as they patrolled the border.
Last Update: Oct 08, 2015 9:55 am
RELATED TOPICS