Davutoğlu: We followed a policy of unity after June 7 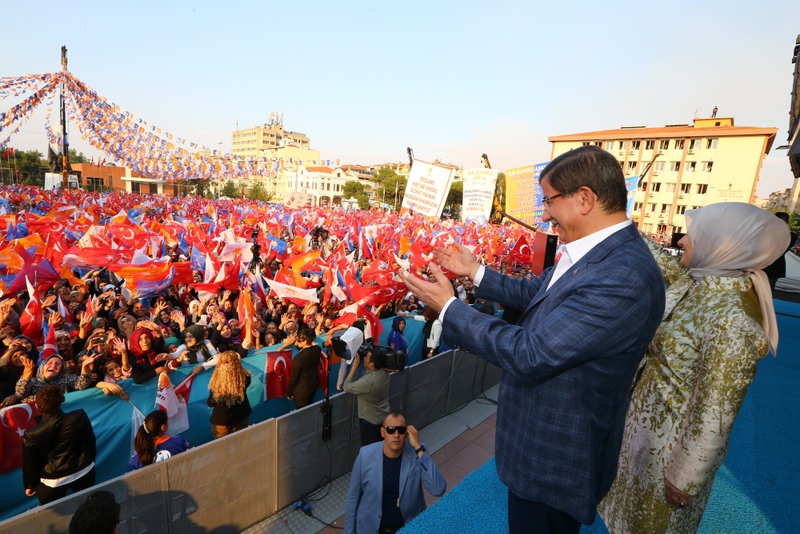 As PM Davutoğlu continues to hold meetings and AK Party election rallies, he said that his party did not leave the country without a gov't after the June 7 elections, saying this time it will win the elections with a majority in Parliament to form a single-party gov't

Prime minister and Justice and Development Party (AK Party) chairman, Ahmet Davutoğlu, said at his party's meeting in the western Manisa province yesterday that the AK Party made a policy of unity during the coalition talks after the June 7 general elections. "We have respected the decision of the people, did not give up the responsibility and did not leave the country without a government," he said. Arguing that Nationalist Movement Party (MHP) voters did not embrace the intransigent policy that MHP Chairman Devlet Bahçeli followed after the June 7 elections, Davutoğlu said Bahçeli is nowhere to be seen while the government fights PKK terror.

Davutoğlu also spoke on the pro-Kurdish Peoples' Democratic Party's (HDP) having a hot and cold attitude about the PKK and said the HDP leans on terrorist organizations, including the PKK-affiliated Democratic Union Party (PYD) and its armed People's Protection Units (YPG), referring to HDP Co-Chair Figen Yüksekdağ's statements on July 20. "Stop taking selfies with terrorists and come to legitimate politics," Davutoğlu said.

As for the upcoming early general election on Nov. 1, Davutoglu vowed not to leave the country without a government, saying the goal of AK Party was to come to power single-handedly.

"Whatever I said [on the previous election] on June 7, I will say the same for the Nov. 1 election. We will not leave Turkey without a government and will not run from our responsibilities. [...] God willing, we will come to power single-handedly on the morning of Nov. 2," he said during a televised interview on Wednesday evening.

More than 54 million people are eligible to vote on Nov. 1.

In the meeting where he announced the party's election manifesto on Oct. 4, regarding Alevi communities, Davutoğlu had promised to take all necessary actions to address their needs and the problems they face. He further announced that all cemevis – Alevi places of worship – will be granted legal status similar to other places of worship.

"We will take all necessary steps to address the needs of our Alevi brothers and sisters. No citizen of this country will be alienated based on their cultural background," Davutoğlu said.

"Until public order is restored and terrorists bury all their weapons, the AK Party's combat against terror will continue," Davutoğlu said.

Saying that Turkey is the country of stability and security in the region, Davutoğlu urged for unity. Furthermore, he said while the AK Party seeks comprehensive reform in the judiciary, the party will devotedly continue the reconciliation process, as the nation wants peace.

As an attractive pledge for young voters, a promise to provide up to TL 50,000 ($16,719) for youth who have work projects took place in the party's manifesto. Additionally, the AK Party promises to provide general health insurance for university graduates for two years.

Continuing with the pledges, Davutoğlu announced that pensioners will be provided an extra TL 1,200 every year. The party also announced that minimum wage will be increased to TL 1,300, but is subject to increase in line with the level of danger the job poses.
RELATED TOPICS