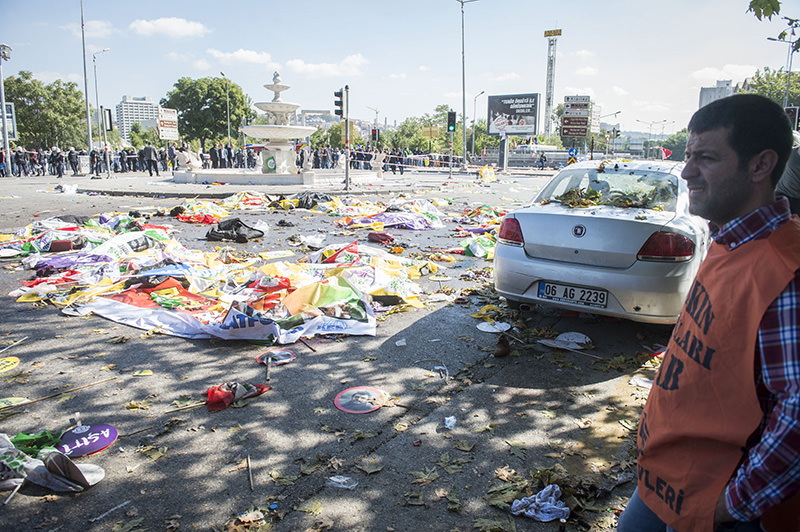 The meeting, which began at 12:00 p.m. local time (0900GMT) at the prime minister's office, lasted for one-and-a-half hours, the sources said. No details of the discussions were disclosed.

The victims were mostly people who had gathered outside the station for a demonstration to be held in nearby at Sıhhiye Square. The rally, organized by the Confederation of Public Sector Trades' Unions (KESK), was to call for an end to the renewed conflict between the terrorist organization PKK and the Turkish state.

Deputy Prime Minister Numan Kurtulmuş said the government was working to "find out the content of this treasonous attack."

"We call on everyone and every person from all sections to be on alert against every kind of provocation and to act with common sense," he added.

Republican People's Party (CHP) leader Kemal Kılıçdaroğlu condemned the attack. "We all should curse the terror, regardless of whichever political view we have or whichever religion we belong to," he said in Istanbul. "We face a scene that Turkey does not deserve."

Kılıçdaroğlu and Peoples' Democratic Party (HDP) leaders Selahattin Demirtaş and Figen Yüksekdağ cancelled election events for the day. Turkey is to hold a general election on Nov. 1. The HDP was among the groups who called for the demonstration.

President Recep Tayyip Erdogğan also cancelled his program of events in Istanbul and was briefed by Altınok and Müezzinoğlu.