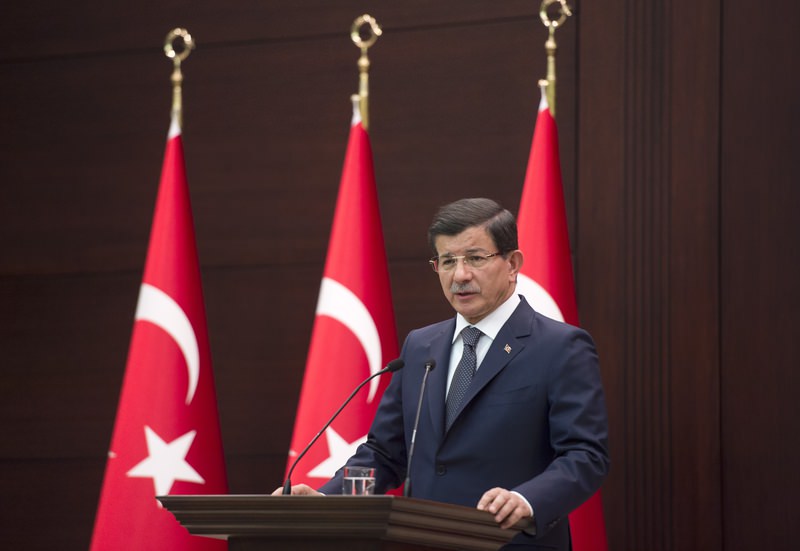 | AA Photo
by Daily Sabah Oct 10, 2015 12:00 am
Turkish PM Ahmet Davutoğlu has announced three days of mourning for victims of Ankara bombing on Saturday. The prime said, there were "strong signs" that Ankara blasts were carried out by two suicide bombers.

Stating that no group has yet claimed responsibility for the attack, the Turkish PM said that ISIS, PKK and DHKP-C terrorist organizations are among the potential suspects.

Condemning the attack, Davutoğlu said that the attack in was the most painful incident in the history of the Turkish Republic.

In the 'heninous attack' early Saturday 95 people were killed and more than 200 were injured by two explosions near Ankara's main train station, where the Confederation of Public Sector Trades' Unions (KESK) and other labor unions were planning to hold a "Labor, peace, democracy" rally at Sıhhiye Square to call for an end to the renewed conflict between the terrorist organization PKK and the Turkish state.

During a press conference, the prime minister said: "Let's not assess terror according to the perpetrator or to the victims. The victims of all terrorist attacks are victims and it is our duty to protect the rights of all victims. Whoever perpetrates terror is guilty. They are the enemies of humanity and mass murderers. We should stand shoulder to shoulder against them."

CHP leader has responded to PM Davutoğlu's call and the two leaders will meet on Sunday at 3 p.m., while the prime minister's invitation was declined by the MHP leader.

"It is not suitable for a chairman of a party that is represented in the parliament to hold a state responsible by drawing conclusions regarding the attackers while there is no certain data on the incident and, at the same time, by ignoring the numerous martyred soldiers and guards killed by the mines placed by the PKK or the civilians killed in a soup restaurant in a PKK bomb attack," prime minister added.