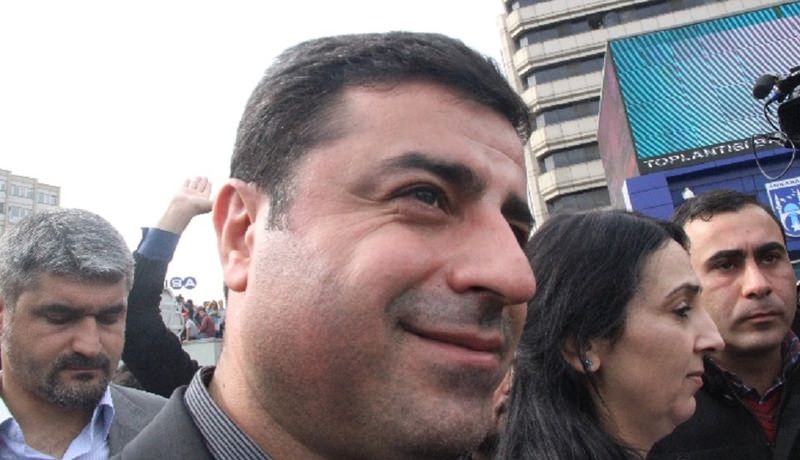 by Yunus Paksoy Oct 12, 2015 12:00 am
Directly labeling the Turkish state and President Recep Tayyip Erdoğan as perpetrators only a couple hours after the deadliest terrorist attack in modern Turkish history, which claimed the lives of at least 95 people and wounded about 150, Peoples' Democratic Party (HDP) Co-Chair Selahattin Demirtaş was at the scene of the incident on Sunday where he attempted to turn the situation into an advantage by holding a small HDP rally and vowing to take down Erdoğan in the upcoming Nov. 1 elections.

Coming under fire for trying to garner votes in the aftermath of the bloody attack that shook the whole country, Demirtaş and his fellow HDP deputies promised to take on Erdoğan and called him a dictator. Speaking a day after the terrorist attack to commemorate those who lost their lives on Saturday, Demirtaş spoke of the upcoming elections, and said: "We will not act with revenge and hatred but bring it to account. Nov. 1 is the first step. The end of your downfall will be on Nov. 1." Demirtaş called Erdoğan a dictator again.

HDP Co-Chairs Selahattin Demirtaş and Figen Yüksekdağ along with HDP Ankara Deputy Sırrı Süreyya Önder drew heavy criticism not only for their opportunist stance but also the smile on their faces.

WHO DID THE JUNE 5 DİYARBAKIR BOMB ATTACK BENEFIT?

The incident sparked controversy and confused many for its similarity to the bomb attack on an HDP rally in southeastern Diyarbakır province only two days before the June 7 elections. In the wake of the attack, many media outlets and journalists claimed that the HDP received more votes in the elections because of it. In addition, prominent Turkish polling company GENAR's head İhsan Aktaş levied the same claim and added that HDP votes increased 3 percent. The attack created an environment for the victimization of the HDP, which eventually helped it pass the 10 percent national election threshold.

WHO DID THE JULY 20 SURUÇ BOMB ATTACK BENEFIT?

A suicide bomb attack claimed the lives of 34 people in Suruç in the southeastern province of Şanlıurfa on July 20. The deadly attack played into the PKK's hand as the terrorist organization found an excuse to take up arms again. Even though the Turkish state which was blamed for the bloody attack by some, those responsible for the attack were brought to light following an investigation. Abdurrahman Alagöz, who carried out the attack, is believed to be a member of the Islamic State of Iraq and al-Sham (ISIS), although the terrorist organization has not claimed responsibility.

IS THE BOMB ATTACK IN ANKARA the SAME AS THOSE IN DİYARBAKIR, SURUÇ?

Speaking to Daily Sabah about the attack in Ankara and the similarity of these three incidents, İlhami Işık, a writer renowned for his views on the Kurdish issue, said the attack was planned atrociously and at the wrong time. Işık also said it is the same game being played in Ankara.

He criticized Demirtaş for his visit to the scene of the attack and said: "Demirtaş has become a total focal point of unrest with his remarks that might lead to even more deaths no matter how victimized they are. It is against our traditions and customs. He polarizes society for political gains. He should abandon it as soon as possible."

Speaking to Sabah daily about the attack in Ankara and its similarity to those in Diyarbakır and Suruç, Orhan Miroğlu, a renowned Kurdish writer and Justice and Development Party (AK Party) Mardin deputy, said: "The purpose of the bomb attack in Diyarbakır two days before the June 7 elections and the massacre in Suruç is the same as that of the bloodshed in Ankara. It is desired that the segment of society in support of the HDP take to the streets with ethnic revenge and hatred engulfing the country."
Last Update: Oct 12, 2015 2:24 am
RELATED TOPICS