Thousands take to streets across Turkey to condemn Ankara bombings 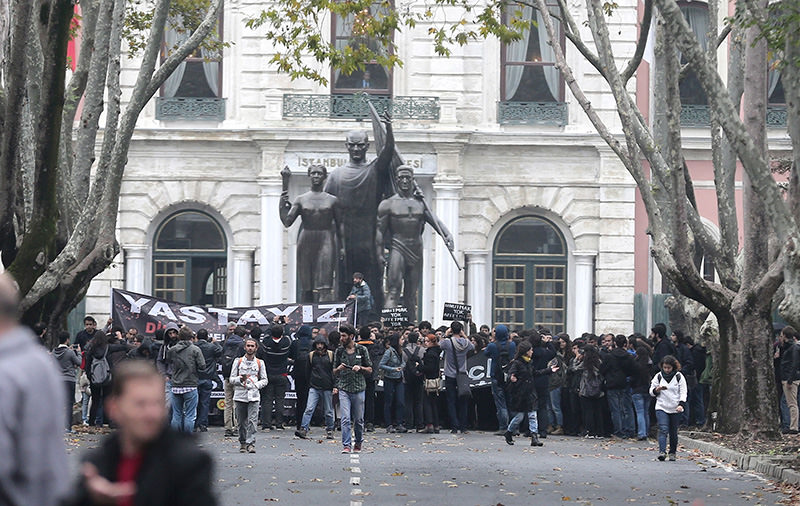 Main campus of Istanbul University (AA photo)
by Anadolu Agency Oct 13, 2015 12:00 am
Protesters took to the streets on Tuesday across Turkey after Saturday's twin blasts in Ankara at a peace rally claimed the lives of at least 97 people.

Thousands of demonstrators, including people from nongovernmental organizations, workers' unions and universities gathered in Turkey's biggest city Istanbul as well as in the provinces of Şanlıurfa, Malatya, Gaziantep, Yalova, Eskişehir, and Samsun.

Chanting slogans condemning terrorism, the protesters rushed to Sirkeci Station and Cerrahpaşa Medical Faculty on the European side of Istanbul to march towards the historic Beyazıt Square. However, Istanbul police intervened since the Governorate did not allow any demonstration en route to Beyazit Square for security reasons.

"The decided meeting locations for the demonstrations are busy points for Istanbulites. Thinking about the sensitive time the country is passing through nowadays, the Istanbul Governorate does not approve of this [route for the] march," the governorate said in a written statement Tuesday.

Meanwhile, people also gathered in the southeastern provinces of Gaziantep, Şanlıurfa, and Malatya. The crowds observed a minute's silence for the victims and also staged a sit-in. People also rallied in the provinces of Bursa, Samsun, and Eskişehir.

So far, no group has claimed responsibility for Saturday's attack.

According to Turkish Deputy Prime Minister Numan Kurtulmuş on Monday, two suicide bombers carried out the attack, each of whom used about five kilograms of TNT explosives.

The deputy premier did not reveal the gender or identities of the suspects, citing a confidentiality order issued by Ankara's Chief Public Prosecutor, but said that the investigation was "in its final stage and more or less concluded".

Saturday's blasts have shaken Turkey as the country faces a general election re-run on Nov. 1, while counter terrorism operations continue in the southeast and an ongoing civil war carries on along its southern border in Syria.
Last Update: Oct 13, 2015 6:08 pm
RELATED TOPICS