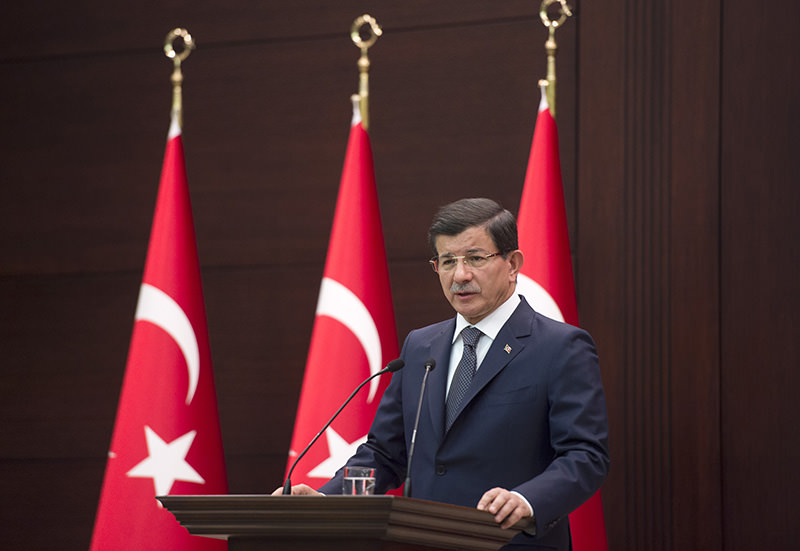 | AA photo
by Daily Sabah with Agencies
Oct 19, 2015 12:00 am
One of the suicide bombers who blew themselves up outside Ankara's main train station on Oct. 10, killing 102 people, has been identified, Prime Minister Ahmet Davutoğlu said on Monday. Later on the same day, Ankara Public Prosecutor's Office confirmed that one of the suicide bombers in the terror attack was ISIS-linked Yunus Emre Alagöz.

PM Davutoğlu said investigations to identify the second attacker were continuing. The prime minister made the comments on private news channel, A Haber.

The blasts have shaken Turkey as the country faces a general election re-run on Nov. 1, while counterterrorism operations continue in the southeast and an ongoing civil war rages on along its southern border in Syria.

The prime minister also touched upon the recent shooting down of a drone by Turkish warplanes, when the drone entered Turkish airspace near Syria on Friday. PM Davutoğlu said, the drone was Russian-made, but Moscow has told Ankara the unmanned aircraft did not belong to Russia.

The prime minister said the drone may have belonged to the forces of Syrian President Bashar al-Assad, the Kurdish PYD militia, or other forces. He added the downing of the drone had a deterrent effect and hoped Russia would show a more careful stance after earlier air space incursions.

The Turkish military shot down a drone on Friday after entering its airspace without authorization. Warnings were sent to avert the aircraft three times, and when the drone did not comply, it was shot down by Turkish military fighter jets.

The Russian defense ministry said on the same day that all its planes in Syria had safely returned to base and all its drones were operating "as planned", the RIA Novosti news agency reported.

Davutoğlu also touched upon the proposed EU funding to help Turkey tackle the migration crisis during the A Haber interview. Turkey wants fresh funding rather than the early disbursal of money already earmarked for it, and wants the sum reviewed annually, the prime minister said.

"The 3 billion euro IPA fund [Instrument for Pre-Accession Assistance] proposal is no longer on the table as we have said we will not accept it," Davutoğlu said. "As for fresh resources, we're talking about a 3 billion euro amount in the first stage. But we don't want to fixate on this because the requirements may go up, and the assessment for this would need to be done annually."

Davutoğlu said the EU's stance on Turkey's demand that visa-free travel be introduced by July 2016 was "positive" but that a clearer picture would only emerge next year.

He also said he believed that six new negotiating "chapters" in Turkey's EU accession process could be opened immediately. The so-called "chapters" concern harmonising rules on a range of issues from energy and economic policy to fundamental rights.

But in a sign of the challenges ahead, Cyprus said on Monday it would not lift its objections to opening frozen chapters.
Last Update: Oct 20, 2015 12:30 pm