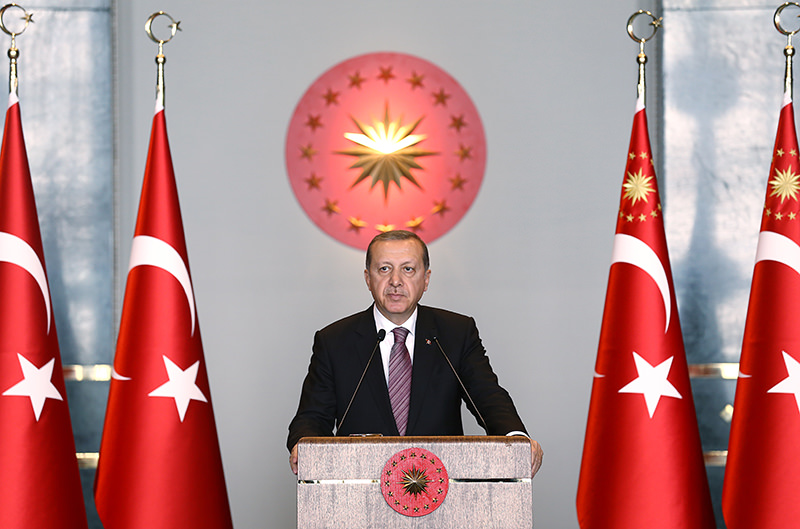 by Daily Sabah with Agencies Oct 22, 2015 12:00 am
President Recep Tayyip Erdoğan on Thursday said the Islamic State of Iraq and al-Sham (ISIS), the PKK, its Syrian affiliate Democratic Union Party (PYD) and the Syrian intelligence service al-Mukhabarat were behind the suicide attack in Ankara, which killed over 100 people and injured hundreds more.

Speaking at the ordinary general assembly of the Confederation of Turkish Real Trade Unions (HAK-İŞ), Erdoğan said the attack was a "collective terrorist act" planned and carried out by multiple terrorist players.

"The PKK, ISIS, al-Mukhabarat and the PYD are all involved. They planned this operation together," he said.

Erdoğan said the Turkish state will not allow such perpetrators to disturb peace in the country and warned Kurdish citizens to be aware of provocations and not be fooled by attempts to divide society.

The Ankara Public Prosecutor's Office confirmed in a statement on Oct. 19 that one of the suicide bombers in the Ankara twin suicide bombing was identified as an ISIS-linked terrorist named Yunus Emre Alagöz, the brother of the Suruç suicide bomber. Thirteen people have been detained on suspicion of being involved with the attack so far as the investigation proceeds. The suicide bombings, the deadliest attack in modern Turkish history, were set off by two suspected bombers in a crowd of leftist, pro-Kurdish and union activists at a peace rally.

There are strong indications that a new wave of migration has begun following an increase in attacks on the Syrian city of Aleppo, Erdoğan also said on Thursday. Erdoğan addressed lawyers at the Presidential Palace on Thursday and repeated his calls to train and equip more Syrian rebels and to set up a safe zone to protect displaced civilians, a plan that has long failed to find traction with Western allies. "If these are done, I believe the migration from Syria will stop and the refugees that we are hosting will also be able to go back," he said, referring to the more than 2 million Syrian refugees in Turkey.

Prime Minister Ahmet Davutoğlu recently claimed that the Syrian regime, ISIS and the PKK made an agreement in May to attack anti-Assad opposition forces and share Turkey's border with Syria.

"ISIS, the PKK and the [Syrian] regime sat around a table on May 28 in Hasakah [in northeastern Syria] and reached an agreement to attack the opposition," he said in a live interview on the private Show TV channel.

"The reason we did not attack the PYD is not its innocence; we will if it is required. We will do what is necessary for Turkey's safety," Prime Minister Ahmet Davutoğlu said.