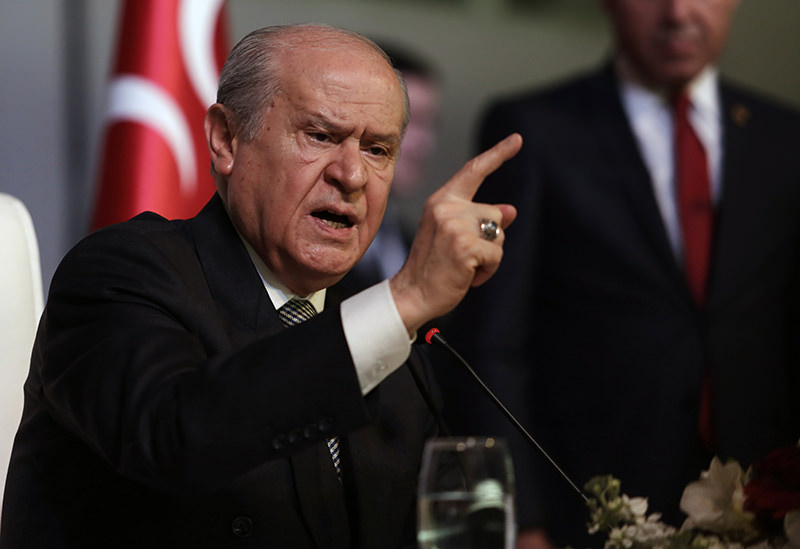 The Nationalist Movement Party's Chairman Devlet Bahu00e7eli carrying out a speech in Adana province (AA Photo)
by Nurbanu Kızıl Nov 03, 2015 12:00 am
More members are resigning from the Nationalist Movement Party (MHP) following the party's poor performance in the November 1 general elections, citing a number of reasons including irresponsibility of party leadership.

MHP's Narman District Head Seyfullah Kılıç in Erzurum province has announced on Monday that he has resigned from the party, as he claimed party's chairman Devlet Bahçeli and his assistants refrain from taking responsibility and respond to the demands of the people.

Kılıç also criticized Bahçeli for not taking responsibility at one of the most critical times when parties failed to form a coalition government following the June 7 elections. He argued that Bahçeli undermined and lowered MHP's status.

"The most honorable action that these particular individuals (in reference to Bahçeli and his circle) could take is to commit suicide, rather than resign." Kılıç has reportedly said.

MHP's Ferizli District Head Zekeriya Karadeniz from Sakarya province has also announced his resignation and said that the MHP has degraded the party base by obtaining fewer votes than the Peoples' Democratic Party (HDP) in the 26th general elections.

He also said that the party's performance was poor as they lost about 1000 votes in the district compared to the June 7 elections.

The party had gained 80 seats in Parliament with 16.29 percent of the vote in the previous elections; however, it had gradually lost its credibility since the June 7 elections through MHP Chairman Devlet Bahçeli's harsh stance toward every option presented by political actors.

A week before the elections, Nacii Meriç, one of the founding members of the MHP has announced his resignation from the party, and urged other members to resign as he claimed that MHP's chairman Devlet Bahçeli has moved the party away from the principles it was established on.


Tuğrul Türkeş, recognized as one of the most influential figures within the MHP had announced his resignation from the MHP following the party's central disciplinary committee's decision to expel him for accepting to participate in the caretaker cabinet.

Türkeş was the first deputy to accept Prime Minister Ahmet Davutoğlu's invitation to take part in the caretaker cabinet and was given the deputy prime minister's post in the run-up to the Nov. 1 election.

Kemal Saraçoğlu, the Nationalist Movement Party's (MHP) candidate for mayor in Şanlıurfa province in the March 30 local elections had also announced that he has joined the AK Party, a month after the resignation of Tuğrul Türkeş.

150 other local members have also recently announced their resignation and transferred to the AK Party, prior to the November 1 general elections.