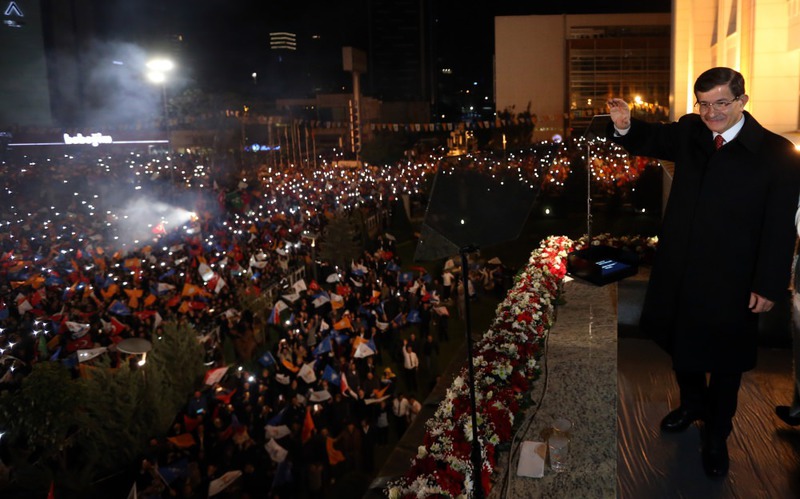 During Davutoğlu's balcony speech that he made after the AK Party's election victory on Sunday, he said his government's priority will be getting rid off the post-coup Constitution and replace it with a new civilian and libertarian one

Prime Minister Ahmet Davutoğlu called on Turkey's political parties to come together and agree to a new constitution after his ruling Justice and Development Party (AK Party) regained its parliamentary majority in Sunday's general elections.

"I'm calling on all parties entering Parliament to form a new civilian national constitution," he said in a balcony speech to thousands of AK Party supporters at party headquarters in Ankara, as fireworks lit the sky. "Let's work together toward a Turkey where conflict, tension and polarization are nonexistent and everyone salutes each other in peace."

"It is obvious that the current system does not meet Turkey's needs. This shirt is too tight for this country," Davutoğlu said.

President Recep Tayyip Erdoğan and the AK Party have sought to turn Turkey from a parliamentary democracy to a presidential system since party co-founder and former prime minister Erdoğan became president in August last year. Although it regained its parliamentary majority in Sunday's election, it is still 14 seats short of the number needed to push through a referendum on constitutional reform. However, Davutoğlu indicated it would be a priority for the new Parliament.

Speaking on the balcony of AK Party headquarters in Ankara, he called for a new "civilian and libertarian constitution" to replace the current model, which was written following the 1980 military coup.

He said a new constitution should make provision for a "healthy electoral system, a transparent and efficient government structure, for a Turkey in which the bureaucracy does not impede politics."

In an appeal to the whole country, Davutoğlu said his government would seek to unify the nation and remove "all kinds of polarization, conflict and all kinds of tension."

The AK Party won 316 seats in Parliament in Turkey's second general election in five months. The June 7 poll saw no party win a majority and coalition talks failed to produce a government. Davutoğlu said: "Don't worry, we got your message. We understood very well the message you gave on June 7 and the one you gave today."

He added: "We have major goals. We have great dreams about this country. We will work day and night to implement these big goals and big dreams."

Lambasting "social engineers, media barons and terror supporters," Davutoğlu said Turks had "smashed all the plots against Turkey," in a reference to the Gülen Movement, PKK terror and violent protests that were designed to overthrow the government.

Erdoğan said Sunday's election result showed that the Turkish nation had chosen to protect an environment of stability and confidence. The president said in a statement that the nation gave the most important message to the PKK that "violence, threats and bloodshed cannot coexist with democracy and rule of law."
RELATED TOPICS