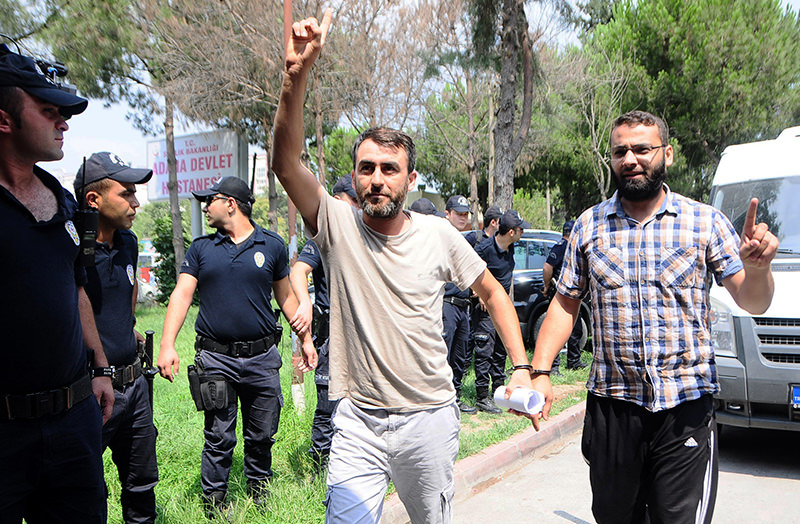 |SABAH Photo
by Daily Sabah with Agencies Nov 04, 2015 12:00 am
Nine alleged members of ISIS believed to have been preparing a suicide bomb attack on a political party's offices in Istanbul have been remanded in custody by a court in southeast Turkey, the local governor's office said.

Police detained two of the suspects after a brief car chase in the southeastern Turkish city of Gaziantep and seven more suspects were detained in subsequent police raids, the governor's office said in a statement dated Tuesday.

The suicide bombings in Ankara – the deadliest attack in modern Turkish history – were set off by two suspected ISIS suicide attackers in a crowd of leftist, pro-Kurdish and union activists at a peace rally. The attacks near Ankara's main train station left the bodies of dead demonstrators strewn across the ground.

In the past 16 months, Turkish police have detained and deported over 560 foreigners in Istanbul alone.

In May 2014, counter terrorism unit of Istanbul Police have established 'interview rooms' in airports, and have interviewed over 2500 passengers suspected to have ties with terrorist organizations.

40 police teams, who were dispatched in airports and bus terminals have received special training in profiling, risk analysis, tracking and interrogation methods. It was reported that the police officers involved in these duties speak other languages such as English, French, German, and Arabic.

Twenty-three questions, prepared by experts, are asked during interviews. More than 550 passengers admitted their intentions to join ISIS and were then deported following these interviews.

A ministry official reportedly said that 20,000 people have been banned from crossing the Syrian border in an effort to prevent foreign fighters from entering Syria through Turkey. In late June the official number for those deported by Turkish authorities was 1,350.