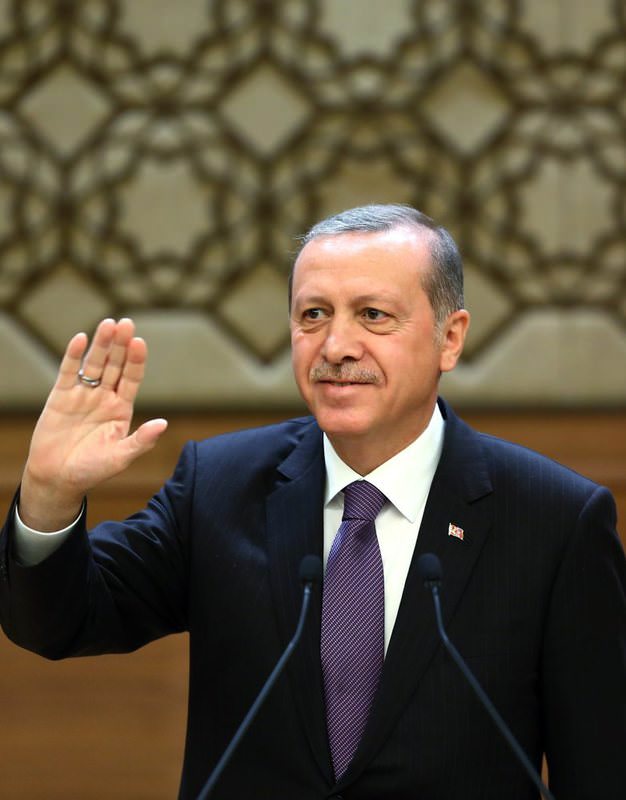 Assuring that Turkey will now only focus on the 2023 goals without any disputes and conflicts, President Erdoğan made an all-embracing call to prepare a new constitution the people wants to see in the new term. He added that the war on terror will not cease until all PKK elements leave Turkey for good

President Recep Tayyip Erdoğan, speaking to village headmen gathered at the Presidential Palace in Ankara on Wednesday, said Turkey has left tough times behind and will now focus all its power on reaching the goals set for 2023. Stating that the country searched for the solution with the people rather than terror or chaos, Erdoğan said: "Turkey now leaves behind a tough period that started with the Gezi protests, intensified with the Dec. 17 and Dec. 25 coup attempts and further escalated with terror incidents."

In the wake of the Nov. 1 elections, Erdoğan commented on the long-discussed issue of a new constitution in his speech. "I hope [opposition parties] will not abstain from contributing to the preparations for a new constitution in the new term and settle it by sitting at the table together," Erdoğan said. He added that Prime Minister Ahmet Davutoğlu would hold meetings with opposition leaders in the upcoming days regarding the issue. During his balcony speech to celebrate the Justice and Development Party's (AK Party) recovered parliamentary majority, Davutoğlu called on all parties entering the Grand National Assembly to form a new civilian constitution.

"Let's work together toward creating a Turkey where conflict, tension and polarization are nonexistent and everyone salutes each other in peace," he said, highlighting the importance of peace and solidarity.

With AK Party's significant 49.35 percent of the vote, delivering 316 seats in Parliament, Davutoğlu said there were "no losers, but winners," and that the AK Party victory belongs to the people of Turkey. In order to take the new constitution to a referendum, at least 330 deputies are required to vote in favor of the motion.

Erdoğan stressed that the outcome of the Nov. 1 elections points to the people's desire for a new constitution. "One of the most significant messages of Nov. 1 is that Turkey needs to resolve the new constitution issue. This is what the people are waiting for," Erdoğan said.

Emphasizing stability in Turkey, Erdoğan said: "The Nov.1 elections indicated that this nation does not allow any political strategy or attempt that would drift Turkey away from the environment of stability and confidence." Erdoğan further said that the nation does not want a coalition, but a single-party government.

War on Terror to Continue at Full SteamErdoğan also touched on terror amid speculations about whether operations against the PKK terrorist organization would continue. He said that the ongoing operations against the PKK will continue until the organization leaves the country for good. "They say that 2,000 Kurdish people have been killed by the state. Excuse me, you have to learn that this state never shoots a bullet at a Kurdish citizen, this state shoots bullets at terrorists," Erdoğan said.

Emphasizing that the new term ahead of Turkey is focused on yielding results rather than disputes, Erdoğan commented on the reconciliation process that is currently "in the freezer." "If a name is sought for this thing, it is now the 'National Unity and Brotherhood Process,'" Erdoğan said.

Erdoğan also bashed municipalities in certain southeastern provinces. Harshly criticizing the municipalities for abetting the PKK, Erdoğan said: "Digging ditches in the streets is a betrayal. These ditches were dug to block security forces from getting in there and make life difficult for citizens. How were these ditches dug? With the heavy equipment of municipalities belonging to the party you know well."

He accused the municipalities for transferring funds through companies close to the PKK when assigning the task of filling in the ditches.

Civil War Call a BetrayalPolarization in Turkey and the need for all political groups to embrace one another were popular discussion points both before and following the Nov. 1 elections. Speaking on the issue, Erdoğan reflected his readiness to embrace everyone.

"Currently, some people are constantly speaking of embracing one another. Okay, we are ready, but you have never embraced [us]. You said: 'We worry that a civil war will break out on Nov. 2'. How can you speak of a civil war?" Erdoğan said.

Voicing his frustration with those speculating about the start of a civil war, Erdoğan said: "If there is anyone in this country that has expectations of a civil war, they constitute a network of betrayal."

The majority of Turkish people living in southeastern provinces back the military's air-and-ground operations against the PKK terrorist organization in Turkey and northern Iraq, Deputy Prime Minister Yalçın Akdoğan has recently said. He blamed HDP for the failure of the reconciliation process and added that the HDP had disappointed its own voters in the June 7 parliamentary elections. "The people who supported the reconciliation process and voted for the HDP are now disappointed with the HDP," he said.

The deputy prime minister also pointed out the waning support for the PKK terrorist group.

"Citizens rightly show their reaction against them. Currently, people do not respond to PKK's calls, while the public support for Turkish state's [security] operations [against PKK] is at around 70 percent," he said. The deputy premier also said that local support for Turkey's operations against the terrorist organization was because normal lives of civilians had been crippled.
Last Update: Nov 05, 2015 2:09 am