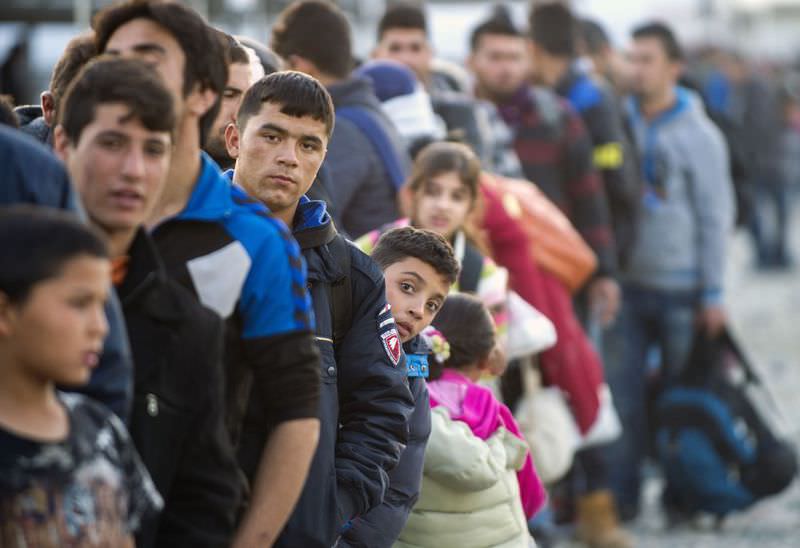 Main opposition CHP leader, who previously pledged in his rallies to send Syrians back to their country, this time slammed the EU for its improving relations with the AK Party government and the drafted refugee action plan to tackle Europe's worsening migrant crisis

Speaking to a group of journalists on Wednesday, Republican People's Party (CHP) Chairman Kemal Kılıçdaroğlu levied harsh criticism at the European Union for delaying the progress report on Turkey after the Nov. 1 elections and labeled the 28-bloc union "two-faced."

While Ankara is trying to step up efforts to build a better relationship and collaboration with the EU, Kılıçdaroğlu, whose days in his position could be numbered following a disappointing 0.35 percent gain in the Nov. 1 elections, openly lashed out at the "two-faced" EU for assessing the government differently as it sees fit.

"It was wrong that the European Commission delayed the progress report on Turkey after the elections. The European Union follows a two-faced policy toward Turkey," Kılıçdaroğlu argued. Asserting that the EU's aforementioned policy contradicts its ethical values, Kılıçdaroğlu said: "[The EU] speaks of the [Turkish] government in a critical way behind closed doors, [yet] they say different things when in front of the doors."

Claiming that there is currently an authoritarian regime in Turkey, Kılıçdaroğlu put the blame on the EU for the present situation. He pointed to the EU's support for Ankara back in 2010 when a constitutional amendment was discussed.

Bothered by the close cooperation between Brussels and Ankara, Kılıçdaroğlu previously voiced his dissatisfaction with the refugee action plan that was agreed in principal to stem the influxes of refugees. A draft action plan to step up cooperation between the EU and Turkey on the refugee crisis that has overwhelmed EU member states was released early October. The plan will allow Turkey and the EU to better cope with the refugee burden, with the EU intending to mobilize up to 3 billion euros for Ankara.

Ankara is willing to sit at the table with the EU to conclude the plan as it has carried the burden of more than 2 million refugees while spending over $8 billion. The plan is designed for Turkey to better control its borders to block refugees entering the EU illegally. The part the EU intends to play is the fair sharing of the burden with Ankara. The plan is also expected to boost relations between Turkey and the EU should both parties fulfill what is required of them. While close cooperation is being sought between the two parties, the EU praised Ankara's efforts, saying: "Turkey is making commendable efforts to provide massive humanitarian aid and support."

Kılıçdaroğlu, who had previously pledged while campaigning to send Syrian refugees back to their country, criticized the draft action plan and took an indifferent approach towards the crisis. Kılıçdaroğlu said any sort of agreement with the EU, which he described as turning the country into the EU's refugee camp, was unacceptable. Kılıçdaroğlu criticized the government for taking in people fleeing the war in Syria, whose numbers now exceed 2.2 million.

"Leave the 3 billion euros aside, if EU countries give 13 billion euros, Turkey should not accept being turned into a refugee camp. We cannot accept that," he said while on his way to the eastern province of Malatya for a party meeting.

In late October Kılıçdaroğlu also asked what Turkey will do with more than 2 million refugees. "We have a whole lot of problems. As if our problems are not enough, 2.2 million Syrian refugees came to Turkey. What are we going to do with them?" Kılıçdaroğlu asked.

Even though Kılıçdaroğlu repeatedly put the blame on the Justice and Development Party (AK Party) government for taking in millions of refugees and sitting at the table with the EU, Ankara is continuing to seek ways to tackle the crisis and bring a solution to the region and Europe.When German Chancellor Angela Merkel paid a sudden visit to Istanbul on Oct. 18, she held a meeting with Prime Minister Ahmet Davutoğlu and discussed the crisis. Davutoğlu named four topics on which the two parties will focus. "The first topic is the fair share of the refugee burden. Turkey has been left alone in the last four years on the issue of sharing [this] burden. The process hereafter should be carried out together irrespective of the 3 billion euros."

Davutoğlu added that visa liberalization must be secured for Turkish citizens for Ankara to sign the readmission agreement. He further stressed that Turkish-EU relations should leap forward.

Turkish authorities, Davutoğlu and President Recep Tayyip Erdoğan in particular, have repeatedly said that Ankara has done and will continue to do its best regarding refugees. Ankara, however, underlined that Turkey is not a refugee camp "and nobody should expect it to be." Davutoğlu in late September called on the international community to stop looking at refugees like they were numbers. While Kılıçdaroğlu criticized the EU and Ankara for collaborating, the EU considered the Nov. 1 elections in Turkey crucial since a possible failure of the AK Party to acquire the absolute majority needed to form a single-party government could have resulted in further instability in the country.

As Turkey neared the elections, some prominent figures inside the EU voiced their support for the idea to include Ankara in all possible plans to tackle the refugee crisis. Merkel, for example, said: "We won't be able to organize and stem the refugee movement without working together with Turkey."
RELATED TOPICS