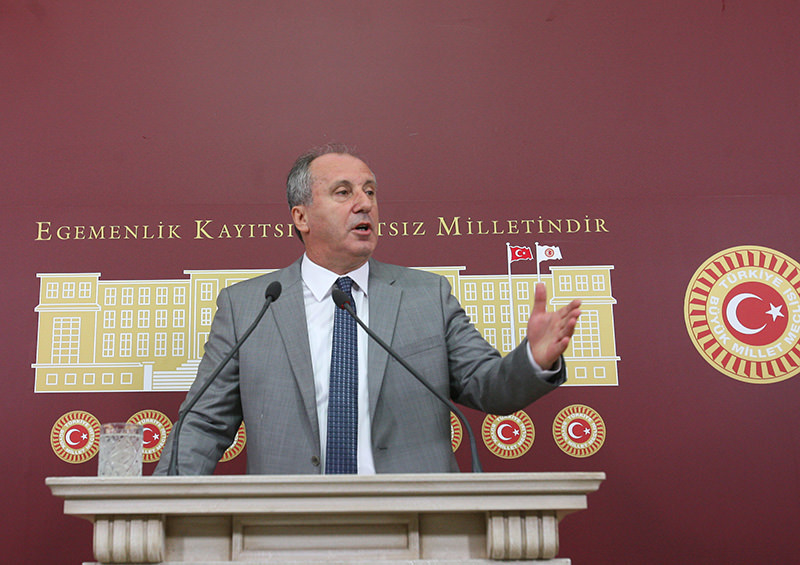 | File photo
by daily sabah Nov 09, 2015 12:00 am
The Republican People's Party (CHP) Yalova Deputy Muharrem İnce said on Monday that a leadership that has lost six elections cannot win for the seventh time, pointing out the CHP's failure in the Nov. 1 elections.

İnce said in a press conference, he will begin collecting signatures for a petition to convene the party for extraordinary assembly to discuss the party's failure as of Tuesday.

CHP deputy's harsh criticism of the current party leader Kemal Kılıçdaroğlu as well as the party's policies signaled that İnce is soon expected to declare his candidacy for the chairmanship.

"CHP is still getting 25 percent, we need to shake ourselves off, the responsible ones should be held accountable for this," CHP deputy İnce, agreeing with his colleagues, said on Tuesday. "If President Erdoğan goes on a referendum for a presidential system, he will win the referendum."

Previously, İnce ran for the CHP chairmanship in the extraordinary congress held in September 2014 and lost to present CHP Chairman Kemal Kılıçdaroğlu. Meanwhile, 42 chairs from provincial organizations, which were elected as delegates in the last congress, made a call on Sunday for the party to hold a special meeting as soon as possible. Earlier, Umut Oran, a former Istanbul deputy for the CHP, called for Kılıçdaroğlu to convene the general congress immediately and announced his candidacy for the chairmanship in a written statement on Wednesday.

Oran said that unless Kılıçdaroğlu faces reality and does what is necessary, the party organization and current delegates will take the most important duty themselves: "As Kılıçdaroğlu said when he took office, unfortunately a considerable increase in votes could not be provided in six elections in the last five years."

İzmir Deputy Mustafa Balbay also announced his candidacy in a televised interview on Saturday, saying he has a duty of loyalty to Kılıçdaroğlu and the party needs reforms in orientation, method and governance. "We are going for the congress. I will present my advice. If they say that these projects will bring our party into power, then I say that I am in. I come with hope, excitement and great energy."

Along with swords drawn for party chairmanship, there is also an increasing tone of criticism from several pro-CHP figures in the media.

On Tuesday, Columnist Bekir Coşkun at the pro-Kemalist daily Sözcü wrote a piece saying Kılıçdaroğlu must leave his seat due to the electoral defeat and that the CHP needs new leaders. "After losing eight elections to [the AK Party], what does a person wait for to leave?" he asked, adding that it is impossible to pretend nothing happened.

Hürriyet columnist Ahmet Hakan, previously known for making favorable remarks about Kılıçdaroğlu, said in his TV program on Monday evening that the CHP needs comprehensive reform. He said: "It is the same in every election, and means that this cannot go on with Kılıçdaroğlu. Will the CHP not reform anything, including its chairman?"