'Turkish defense industry has achieved much but more ahead' 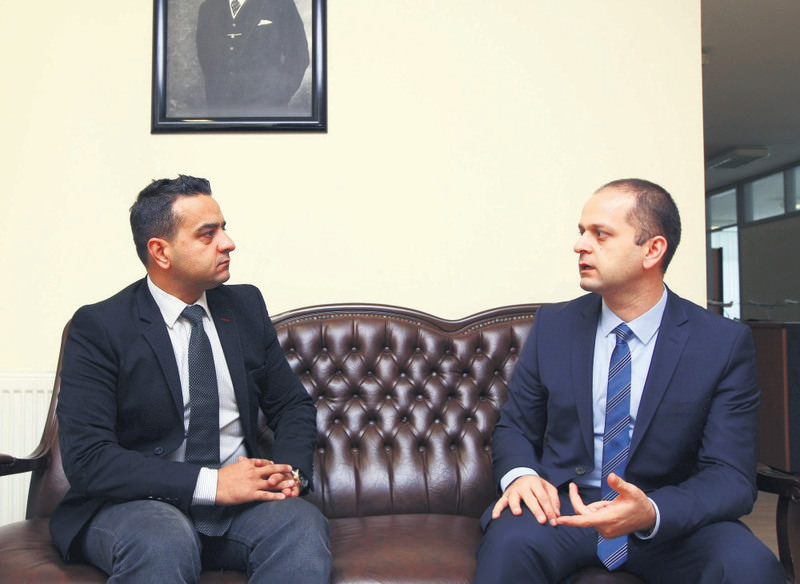 Defense industry expert Mevlütoğlu thinks that Turkey has potential to be an important actor in the global defense industry field, but stressed the necessity of applying long-term strategies and serious measures to remove the risk of becoming a museum of prototypes

According to Mevlütoğlu, the continuation of the positive trend in the industry depends on a number of factors and measures such as human resources, industrialization policies, improvement of research and development (R&D) and innovation capacity, interaction with other sectors and foreign relations. He said Turkey can become a significant actor in the defense and aerospace industries globally only if serious measures and long-term policies are applied, but if they are not, the Turkish defense industry will face the risk of becoming a museum of prototypes.

DS: How do you evaluate the Turkish defense industry in general? Do you believe that it could become a significant actor in the sector worldwide?

Firstly, it should be emphasized that the defense industry is an asset for national security. Therefore, it should not be assessed only as a means to equip armed forces. The defense industry is directly associated with the economy, industrial policy, foreign relations and other sectors such as information and communications technologies (ICT), health and transportation.

In Turkey's experience the importance of the national defense industry was first realized with the Johnson Letter incident in 1964 when the United States threatened not to defend Turkey in case of a Soviet attack when Turkey acts on its own in the Cyprus issue. Until that time, Turkish defense capacity was built entirely on U.S. and allied military aid, training and doctrine. More solid steps were taken in the mid-1970s, especially after the U.S. arms embargo, with the foundation of national defense companies. This has not been an easy process as the defense industry is an interdisciplinary sector and incorporates a number of high technology fields. This means that building a sustainable sector depends on improvements in a large number of various fields such as electronics, materials science, construction, human resources as well as financial potential and political stability.

From this perspective, we see a sharp increase in the momentum of the Turkish defense industry starting in the early 2000s. The continuation of this trend depends on a number of factors and measures such as human resources, industrialization policies, improvement of R&D and innovation capacity, interaction with other sectors and foreign relations.

So yes, Turkey can become a significant actor in the defense and aerospace industries in the world, but only if serious measures and long-term policies are applied.

I have mentioned the interdisciplinary nature of the defense industry. To elaborate, we can take into account a main battle tank. These platforms incorporate elements from the automotive sector, materials science and electronics. In addition, to fulfill the operational requirements of land forces, efforts to develop a main battle tank can lead to improvements in these sectors given that these projects are managed under long-term, carefully planned industry and technology policies.

There is also another very important dimension to these projects. Turkey is neighbor to a large number of conflict zones, hot spots and crisis regions. In order to establish national security and protect national interests in such a region, while protecting a not so small economic, political and military hinterland, Turkey should have a powerful military. Building up and sustaining a military capable of protecting the country's national interests in different regions is not possible through direct procurement from abroad, it is only possible through national resources, indigenously designed and developed systems and platforms that in turn are the products of indigenously developed national security policies.

Improvements in national shipbuilding, automotive and electronics industries encouraged decision makers to initiate long-term programs such as Milgem, Altay and Anka. But now there lies the challenge in front of all stakeholders of the industry of converting these projects from prototypes into products. We will only see if these projects were realistic or not when this conversion is successfully completed.

The export potential of the Turkish aerospace industry has its fate tied to development of a long-term and robust industrial policy and technology management strategy. The sector is in a trend of steady growth both in terms of local market and export sales, but increasing their rates is only possible through more emphasis on R&D, innovation and sound business development strategies.

The R&D and innovation capacity of the sector relies mainly on the requirements of the local market. Combined with import substitution policies, this can be considered a weakness in terms of competitiveness in the global market. Local market demands may not always be consistent with the trends and conditions of the global market, and local companies may find it difficult to penetrate rising markets. On the other hand, solely focusing on exports has the risk of not producing sufficient results since it is almost impossible to successfully market an aerospace product to international customers when that product has not entered service on the local end.

Achieving successful export figures and developing competitive power are not purely technical issues, but require strong skills in social, economic and techno-political aspects of the topic. The Turkish defense industry seems to be faced with this very fundamental lesson.

One other major challenge for export performance is the cost of exports. Currently, the export portfolio of the Turkish defense industry is mainly communication systems, land vehicles, patrol boats and parts manufacturing. Exports of more complex platforms such as combat ships, aircraft, satellites and the like require importing critical subsystems from abroad. For example, engine and transmission systems mark a huge proportion of the cost breakdown of a tank. If those subsystems are not Turkish made, then a significant portion of the export income of that tank will have to be directed to foreign suppliers.

Here we see the very critical issue that sustainability of the Turkish defense industry in terms of both exports and industrial growth depends on successful industry policies of development through small- and medium-sized enterprises (SMEs), localization of critical technologies and subsystems. We need to increase the percentage of high-value, high-technology products and solutions.

DS: The Turkish long-range air and missile defense system (T-LORAMIDS) project contract continues to be one of the most debated issues in the international arena for a long time. What is the importance of this project for Turkey?

After the announcement of the decision in the T-LORAMIDS project in 2013, the issue has become an extremely complex political and technical problem. It turned out that the evaluation had been done on purely technical grounds, apparently without the involvement of strategic, political and legal dimensions. However, these are strategic defense systems, meaning that development, procurement and deployment of such platforms have direct consequences for national security, foreign relations, alliances and military relations.

I believe that the T-LORAMIDS project provides a very good case study on the political, economic, industrial and legal aspects of defense procurement policies. It seems that Turkish national security planning and execution mechanisms lack such interdisciplinary vision.

DS: There has not been any final decision made on the T-LORAMIDS contract, but if Turkey agrees to continue with the Chinese missile system does this mean that Turkey's NATO membership needs to be questioned? Is the criticism justified on this issue?

Selection of a Chinese system will, undoubtedly, have direct complications on the relationship between Turkey and NATO. Missile technology is one of the very critical technology fields that China puts emphasis on. If Turkey has a solid strategy and coordinated action plans on countering the above mentioned complications on strategic, political, legal, military and technological levels, than we may expect a relatively smooth "fallout" period.

DS: What is the latest on the domestically designed and produced Altay main battle tank? What do you think is the greatest challenge for Turkey regarding the national tank project?

The Altay program covers the design, development, testing and qualification of a new generation main battle tank with the help of a foreign technical assistance provider. So far a number of prototypes have been built and tests are underway, according to open sources. There will be a contract for serial production and hopefully, it will enter service with the Turkish Army toward the end of this decade.

The Altay project marks a very important milestone in the Turkish defense industry, especially in very critical technologies such as engine and transmission, armor and command and control. Several industrialization and local development projects are underway to develop indigenous solutions in these fields. Independent of the discussions of the future of the main battle tank, the program represents a steppingstone for the Turkish defense industry.

DS: Ankara announced last year that it is going to purchase F-35 warplanes, and at the same time the country owns a project that aims to produce its own warplanes. Do you think that Turkey's national warplane project is realistic in terms of the industry's competitiveness?

After the burial in early 1950s, the Turkish aviation sector was reborn in the early 1980s with the establishment of the Turkish Aerospace Industries (TAI) with the F-16 project. The sector today is busy in a number of ambitious projects such as the Hürkuş trainer aircraft, T129 Atak attack helicopter, Anka unmanned aircraft system, Göktürk intelligence satellites and a number of modernization and upgrade programs. Success in these programs requires completion of development processes and initiation of serial production. So in summary, the Turkish aerospace sector is still in its baby steps period. Design, development and production of a new generation fighter aircraft that is capable of protecting Turkish airspace is a very challenging task. This task is impossible without significant investment into human resources, R&D and innovation potential and infrastructure.

More importantly, we need assistance of a qualified, long-term partner in order to avoid risks and take advantage of experiences. We should not forget that we are trying to develop a modern fighter aircraft with an industry that is 10 to 15 years old. All modern fighter aircraft that are in service today are products of nations that have been doing this since the early 20th century. We need to be realistic and follow a step-by-step approach.

DS: What do you see as the biggest challenge in front of the Turkish defense industry?

It has had significant achievements in the past decade. A lot of important projects were realized and the size of the industry has grown in terms of both revenue and manpower. Currently, we have prototypes that are in the test and certification phases like Anka, T129 Atak and Altay.

Turning prototypes into products, however, is an entirely different process, as it requires industry policy, adequate human resources, a complete vision of logistics and development of the SME base. Frankly, the pace of developments in these is not encouraging.

If such long-term strategies and coordinated measures are not applied, the Turkish defense industry will face the risk of becoming a museum of prototypes.

Arda Mevlütoğlu received his bachelors of science in astronautical engineering at Istanbul Technical University and his masters of science in science and technology policy studies (TEKPOL) at Middle East Technical University. He is currently working as the defense programs manager of an international consulting and trading company. Mevlütoğlu has been conducting research on the defense industry and national security policies, the market and technology trends with work featured in Turkish and international publications. He also publishes his works on these topics on his blog, Siyah Gri Beyaz.
Last Update: Nov 09, 2015 10:28 pm