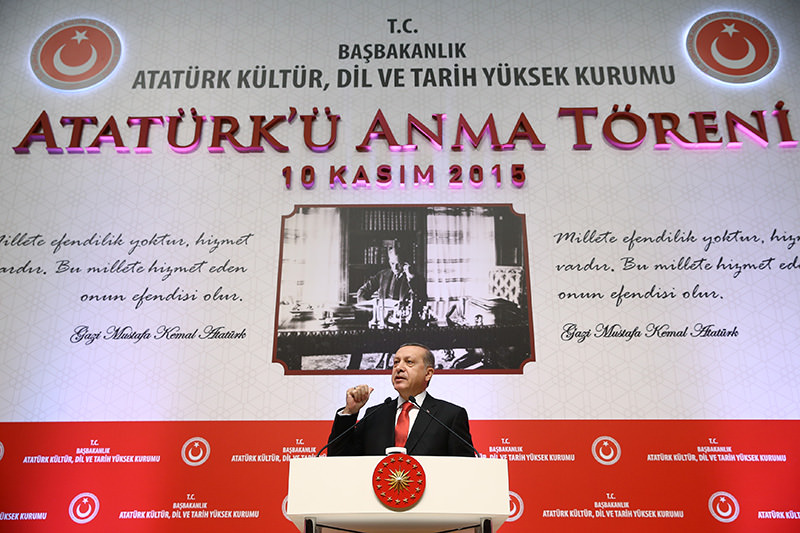 | AA photo
by daily sabah
Nov 10, 2015 12:00 am
Speaking at a ceremony on Tuesday to commemorate the 77th anniversary of the death of Mustafa Kemal Atatürk's , the founder of the Republic of Turkey, President Recep Tayyip Erdoğan said the last 13 years constitute the most successful period in the Republic's history. Over this time the country strengthened its democracy and human rights as well as the rule of law.

Underscoring that the Republic of Turkey is the name of the state embraced by 78 million people, Erdoğan ensured that there is no going back for the country on the progress it has made in democracy, human rights and therule of law. "The Republic of Turkey has recorded its greatest achievements in the last 13 years of its 92-year-old history. Has our Republic suffered a loss over the course of this period? [If yes] somebody should prove it to us so we can see," Erdoğan said, adding that the Republic has never before been exposed to such threat and concerns about the regime should fall off the agenda.

Erdoğan once again highlighted four main elements that Turkey cannot give up. "I'm saying one nation, one flag, one motherland, one state. We cannot make any concessions here," Erdoğan said. He also emphasized that these principles constitute the four pillars upon which Turkey will build its future.

The president also touched on the Nov. 1 elections and called on the Turkish people to believe in the nation. "The Nov. 1 elections have opened the way to a four-year period of stability and confidence. Let's not abstain from talking about or discussing anything. We, as rulers of this country, shall fulfill what falls on our shoulders and leave the ultimate decision to our nation," Erdoğan said.

In line with the aforementioned message regarding the path ahead of the country, Erdoğan emphasized that Turkey should now focus on the future in order to achieve this prosperity.

Erdoğan also reminded citizens of their ancestral ties to the land and called on Turks to defend their homeland. "We cannot leave the Ottoman [Empire] or Seljuk [Empire] aside while protecting the Republic. We are not a tribal state but the descendants of noble ancestors," Erdoğan said.
Erdoğan last week laid emphasis on Turkey's goals for 2023 as well as the obstacles it has overcome: "Turkey now leaves behind a tough period that started with the Gezi protests, intensified with the Dec. 17 and Dec. 25 coup attempts and further escalated with terror incidents." Erdoğan also highlighted the significance of solidarity: "Let's work together toward creating a Turkey where conflict, tension and polarization are nonexistent and everyone salutes each other in peace."

Advocating for stability in Turkey, Erdoğan last week said, "The Nov. 1 elections indicated that this nation does not allow any political strategy or attempt that would threaten the stability and confidence of Turkey." Erdoğan further said that the nation does not want a coalition, but a single-party government.

Following the June 7 general elections in which the AK Party garnered 40.8 percent of the vote and failed to receive a parliamentary majority with 258 deputies, the parties failed to form a coalition government despite five weeks of negotiations. The unsuccessful talks led to Erdoğan's call for snap elections.