Differences remain between Russia, US on Syria after Putin-Obama meeting on G20 sidelines: Kremlin 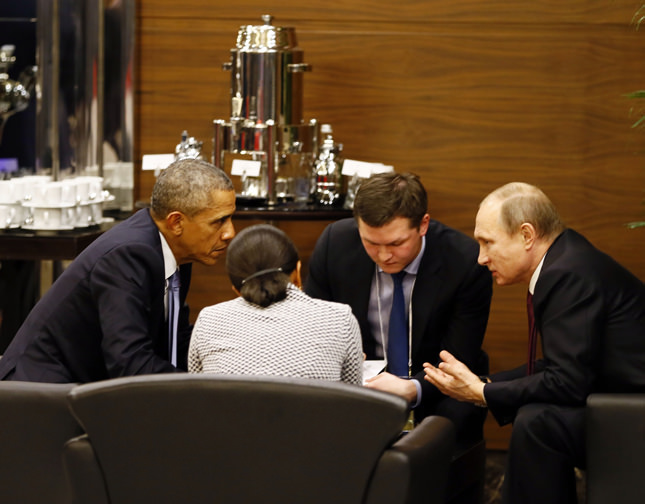 by Nov 15, 2015 12:00 am
Kremlin said Sunday that the differences remain between the U.S. and Russia on Syrian policy after U.S. President Barack Obama and Vladimir Putin huddled for informal talks around a coffee table during their first summit since Moscow launched air bombardments in Syria.

A White Hourse official later on said that the two leaders held "a constructive discussion" on Syria and agreed on the need for UN-negotiated Syria talks and ceasefire.

"President Obama and President Putin agreed on the need for a Syrian-led and Syrian-owned political transition, which would be proceeded by UN-mediated negotiations between the Syrian opposition and regime as well a ceasefire," the official told reporters after the leaders met.

The two "held a constructive discussion" that lasted about 35 minutes, the official added.

The two leaders sat in leather armchairs on opposite sides of a small, low coffee table, both leaning far forward in animated discussion on the sidelines of a Group of 20 summit in the Turkish Mediterranean resort of Antalya.

Television pictures, with no sound, showed images of the intense coffee table summit, held alongside a potted palm and a tall coffee bar as other delegates wandered by and security agents partially obstructed the view of the television camera.

Obama, who was gesturing to reinforce his points, and Putin were flanked at the coffee table by White House National Security Advisor Susan Rice and another unidentified man, apparently a translator.

It was their first meeting since Russia launched its declared anti-Islamic State air bombardment in Syria at the end of September. The West suspects the campaign is aimed at propping up Syrian President Bashar al-Assad.

Relations between the two powers have deteriorated, in particular over Russia's backing for pro-Moscow rebels in Ukraine and now its air campaign in Syria, launched just after Putin's last meeting with Obama in New York in September.

The frosty atmosphere at Putin's previous meetings with Obama has become a symbol of the decline in Russia-US relations, with the Russian leader occasionally seen slumped in his chair legs akimbo and the US president appearing deeply uncomfortable.

Obama in 2013 had joked that Putin looked like "that bored schoolboy in the back of the classroom", adding to offence he caused in 2009 by saying the ex-KGB spy had "one foot in the old ways of doing business".