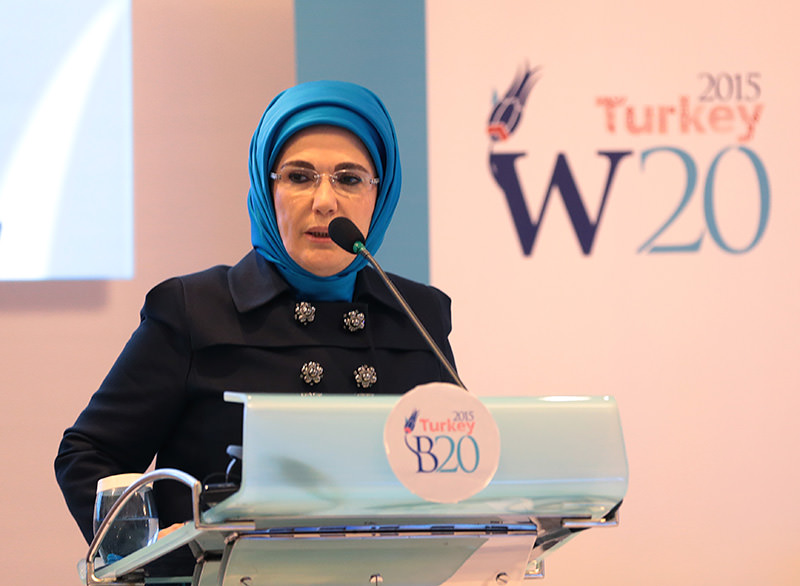 In her opening remarks to the Business 20 - Women 20 joint panel on female refugees at the G20 Summit in southern Antalya province Sunday, Erdoğan said: "As a mother, I cannot accept the fact that children are drowning at sea and are losing their lives trying to pass through wire fences.

"The most effected people from human tragedy are women and children as always," she said.

"What can be in bag of a refugee but fear and uncertainty? How can the tiny bodies of children carry such heavy burdens? Every one of them are women and children, humans like us. They have hopes and plans for future and they have feelings," she added.

She said that women and children were paying the highest price in the ongoing global tragedies.

"We should say stop to all kinds of cruelty without discriminating on the basis of language, religion and race. We should not sacrifice women and children to religion in any kind of fight and war," she said.

"Think of a mother who escapes from a war zone, she is only taking the risk for herself and she is also taking a risk for her children," she said.

She noted that 65,000 infants have been born at Turkish refugees camps since 2011.

"The basic requirement of bigger developed countries should be to keep human values as high as possible. In this aspect, I invite the international society to stand more ethically and more morally in terms of refugees. And I would like to invite all leaders and their spouses, business world, civil society and media bosses to work together."

The first lady also praised Turkey's achievement on women issues. "Turkey has attached great importance to women at the G20 by including them on its agenda," she said.

The Women 20 engagement group, which focuses on promoting gender inclusiveness and gender equality, was formed under the Turkish presidency of G20.

She also highlighted the high numbers of participation in the B20 group.

"In the past G20, an average of 300 companies participated in the summit, but under the Turkish presidency, the number has increased to 700 companies. Now, we know that B20 has a more comprehensive quality," she said.