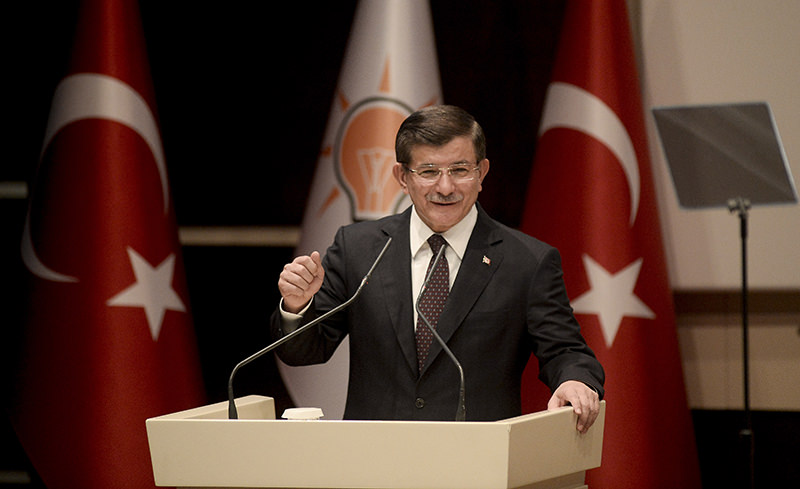 | AA Photo
by Daily Sabah with AA
Nov 16, 2015 12:00 am
Prime Minister Ahmet Davutoğlu has said that the new Justice and Development (AK) Party government will work in the new term to build a country where people enjoy more freedoms, justice and stability.

"We will proceed towards our target of a Turkey that is freer, more just, and more credible," he said on Monday during an address to new AK Party deputies at the party's headquarters in Ankara.

Davutoğlu stressed that their aim is to build a stable and dynamic Turkey "which grows stronger in democracy".

"Turkey will be the country that all will be proud to be a citizen of, and the civilization center of the world," he said.

The Turkish prime minister maintained that a new constitution is the key need, and the responsibility of drafting it is upon the shoulders of not only the AK Party but also all political parties.

"As we are entering a new legislative term, it is my call to opposition parties. We are ready for cooperation in any field that serves the interests of our nation. Let's pass the reforms that our people need with a constructive will," he added.

Davutoğlu further stated that they will put into practice new reforms with a "liberal and participatory sense" within the first three months, right after they receive a vote of confidence and have parliamentary approval for the government budget.

He noted that steps which do not require legal amendments will be taken right away, while the rest will also be addressed immediately. He underscored that everybody will feel like a first class citizen in the country, regardless of their religion, sect, race, language, political ideology and economic situation.

"Turkey will be a strong country that is growing and developing as we take concrete and just steps," he said.

"We provide the solid steps of the past 13 years [under AK Party rule] as a guarantee for this," he added.

In Nov. 1 snap elections, the AK Party regained its single-party majority with 317 seats in the 550-seat Turkish parliament by winning 49.5 percent of the votes.

The new deputies of the Grand National Assembly of Turkey will take their oaths on Tuesday and the parliament will also elect a new speaker, after which the president, Recep Tayyip Erdoğan, is expected to give the mandate to Davutoğlu-as the chairman of the AK Party-to form a new cabinet.
Last Update: Nov 16, 2015 3:07 pm