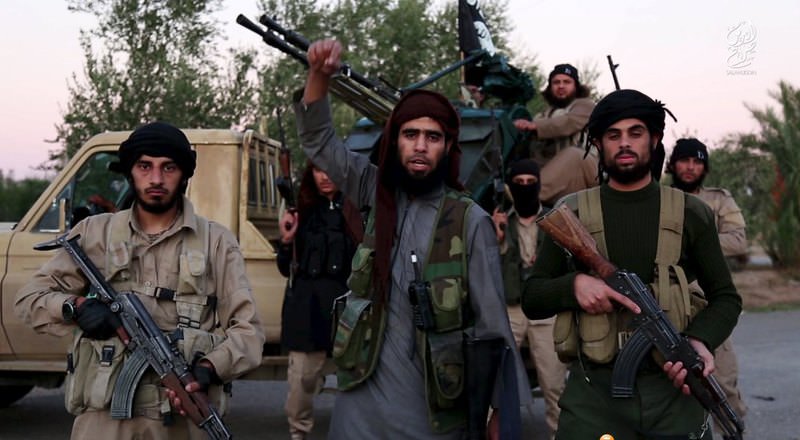 As part of a new operation that aims to better crack down on DAESH and secure the rest of the northern Syrian border, the U.S. and Turkey will pound DAESH targets from the air while opposition forces act as ground forces

U.S. Secretary of State John Kerry, speaking in an interview with CNN on Tuesday, revealed that the U.S. is planning to embark on a new operation with Turkey to secure an approximately 98-kilometer portion of the Turkish-Syrian border. "The entire border of northern Syria – 75 percent of it – has now been shut off. And we are entering an operation with the Turks to shut off the other remaining 98 kilometers," Kerry said.

With regard to the details of the operation, diplomatic sources who spoke to Daily Sabah said that opposition forces, not including the terrorist PKK-affiliated Democratic Union Party (PYD), will strike DAESH from the ground while the U.S. and Turkey provide air support. The statement came days after Foreign Minister Feridun Siniroğlu said that Ankara might launch a new operation with the U.S. against DAESH. Meanwhile, clarifying false allegations about Turkey not doing enough in the fight against DAESH, a U.S. State Department spokesman on Monday hailed Turkey as "a frontline state" in the fight against the terrorist organization DAESH.

U.S. State Department spokesman Mark Toner's comments were in response to whether Russian President Vladimir Putin was referring to Turkey during the G20 summit when he said one of the members of the group is turning a blind eye to DAESH.

Pointing out that Ankara has allowed the U.S-led coalition to use its İncirlik Air Base with the aim of strengthening the coalition's hand, Toner said: "We fly out of Turkey's air base that brings us closer and allows us to hit ISIL [DAESH] more quickly and more forcefully than we could."

Toner acknowledged Turkey's place in the conflict: "Turkey is a front line state in this conflict." He also stressed that the terrorist organization is no less dangerous to Turkey than any other country in the world. DAESH "is as much an existential threat for Turkey as it is for any of us," he said. He also noted Turkey's significance and key role saying that Turkey is a capable partner in the fight against DAESH. Toner said dialogue between Turkey and the U.S. is focused on protecting Turkey's borders as it has received a major influx of refugees.

Turkey has been home to over 2 million refugees and spent more than $7 billion in this regard. In addition, the country has been hit by several DAESH attacks, including a twin suicide bombing in Ankara last month that killed 102 citizens and wounded over 200. Turkish security forces also continue to crack down on DAESH militants and launch raids against cell houses. Security forces have detained around 1,000 DAESH-linked suspects, expelled nearly 2,000 suspected foreign nationals and banned some 15,000 others from entering the country. Turkey was one of the first countries to include DAESH on its list of terror organizations in 2013.

Meanwhile, U.S. President Barack Obama on Monday delivered a speech at the end of the G20 summit that took place in southern Antalya province of Turkey. Obama said: "Here at the G-20, our nations have sent a message -- that we are united against this threat. ISIL is the face of evil. Our goal, as I've said many times, is to degrade and ultimately destroy this barbaric terrorist organization."

He said that airstrikes by the U.S.-led coalition have been effective in taking out key members of the terror group's leadership. He also added that DAESH leaders will not have a safe-haven anywhere.

In regards to preventing the Paris attack, Obama said his intelligence agencies gave no specific mentions of this particular attack that would have indicated something that the U.S. could have provided French authorities.

President Recep Tayyip Erdoğan addressed the issue during his speech at the end of the G20 summit as well. "We are resolved to address this threat by enhancing our cooperation and developing relevant measures to prevent and tackle this phenomenon, including operational information-sharing, border management to detect travel, preventive measures and appropriate criminal justice response. We will work together to strengthen global aviation security."