Turkey not the only country facing Russian violation of airspace 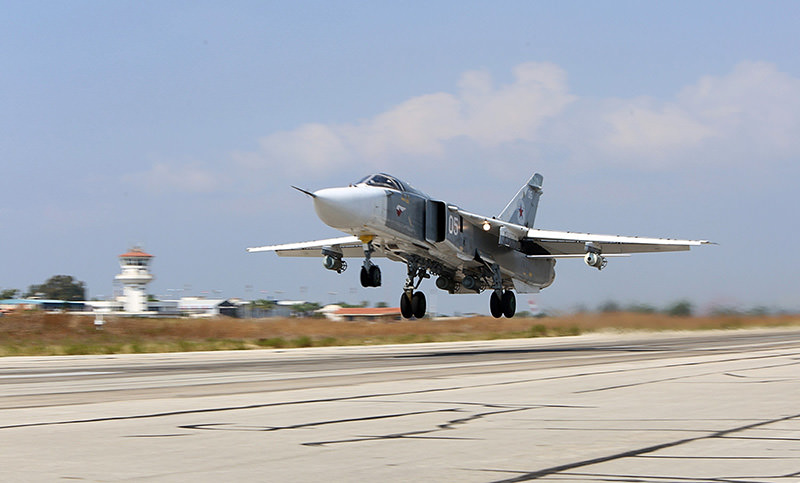 | AFP Photo
by Anadolu Agency Nov 25, 2015 12:00 am
Russia's recent violation of Turkish airspace is by no means an unprecedented incident, as the country has been accused of such behavior by other countries earlier this year as well.

The incident reportedly occurred in international waters east of the peninsula.

On June 30, The Associated Press ran a story about Russian fighter pilots "flying dangerously close to Swedish Air Force jets and in some cases even releasing flares at them," citing Supreme Commander of the Swedish Armed Forces, General Sverker Goransson.

Sweden's top military officer reportedly said that Russians were breaking the normal rules of conduct for military aircraft in the air, including breaking formation, flying at unsafe distances and using "countermeasures" that "nearly bounce off the metal" of the Swedish aircraft; referring to decoy flares designed to divert incoming missiles.

The Russian bombers, which are capable of carrying nuclear warheads, resumed their normal routes after the interception, he added.

Nordic nations had agreed in April to boost their defense ties, increase solidarity with Baltic states, and conduct joint military exercises amid deteriorating relations with Russia, calling it "the biggest challenge to European Security".

Defense ministers of Norway, Sweden, Denmark, Iceland and Finland said in a joint declaration on April 9 that their countries must be prepared for emergencies that might arise.

The ministers said in the declaration published in the Norwegian daily Aftenposten: "(Russia) has shown that it is ready to use military means to achieve their political goals, even when it involves violations of international law."

"There is increasing military and intelligence activity in the Baltics and in our northern areas," the ministers said.

"The Russian military is challenging us along our borders and there have been several border infringements in the Baltics," they added.

The heightened tensions also led to the traditionally neutral Scandinavian countries to upgrade their defense capabilities. Finland and Sweden are not NATO-member countries, but they have increased their cooperation with the Alliance in response to what they call "Russian aggression".

Sweden and Denmark also summoned their respective Russian ambassadors in December 2014 in response to a Russian military plane reportedly turning off its location device and nearly colliding with a Swedish civilian airliner.

Russia was accused of violating Finnish airspace with its aircraft three times in a week in late August 2014 and twice in May the same year.

A Russian Tu-95 bomber was intercepted off the coast of Japan on two separate occasions on March 20, according to the Japanese Ministry of Defense, the International Business Times reported three days later.

Reuters had run a story on Jan. 20, saying in the three quarters to Dec. 31, Japanese jets scrambled 369 times to meet Russian planes, four times the pace of a decade ago, citing Japan's Defense Ministry.

Only a day after the Japanese incident, six Russian warplanes were intercepted near Latvia's territorial waters on March 21.

And in the week prior, Spanish and Italian NATO jets intercepted Russian planes in international airspace near Latvia, while Russian submarines were seen in the country's exclusive economic zone, just 27 miles (43.45 kilometers) from the start of Latvia's territorial waters and 39 miles (62.76 kilometers) from its coastline, IB Times reported.

In January, Typhoon jets were dispatched from RAF Lossiemouth in Scotland and RAF Coningsby in Lincolnshire to intercept two Russian bombers capable of carrying nuclear missiles as they flew south of Bournemouth, according to Daily Mail.

On Feb. 17, HMS Argyll reportedly intercepted a Neustrashimy-class warship and its accompanying tanker as they headed home after a deployment in the Mediterranean in the English Channel.

On Tuesday, two Turkish F-16 fighter jets on an aerial patrol intercepted a Russian warplane within engagement rules when it intruded into Turkish airspace on the Turkey-Syria border.

Russian Defense Ministry confirmed that its Russian SU-24 fighter jet had been shot down, which crashed in the Syrian region of Bayirbucak close to Yayladagi district of southern Hatay province.

NATO confirmed the accuracy of the radar trace data that Turkey shared which clearly showed that the Russian warplane violated Turkish airspace.

This was not the first time Russian fighter jets had violated Turkish airspace. In early October, Russian warplanes had breached Turkish airspace for which Russian officials apologized and pledged that no such incident would be repeated; Turkey had also renewed its warning to implement engagement rules, including military response against violations of Turkish airspace.