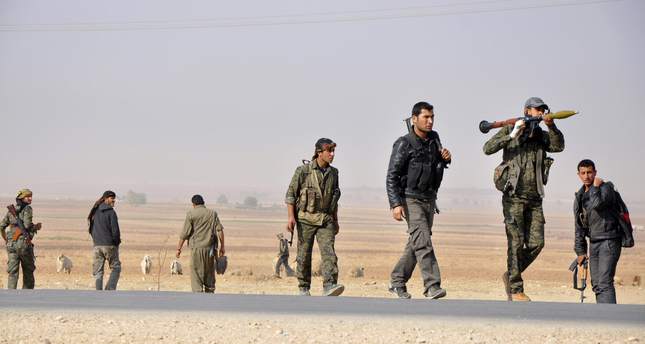 Following reports of Russia launching air strikes to support the YPG offensive against groups in Azaz, it seems that Russia wants to continue playing the YPG card even after the downed jet crisis with Turkey. YPG wants to expand its territory in northern Syria, especially toward the Azaz region near the Turkish border.

The Russian armor delivery went to a YPG camp where fighters are trained and then brought to battlefields in Aleppo, Kobani and Qamishlo. Veteran soldiers from the PKK's Qandil headquarters also help run the training programs.

This latest move indicates that Russia has other targets besides DAESH in Syria. Since the beginning of its airstrikes in Syria, Russia has claimed it has focused on attacking DAESH, but several observers say they target opposition groups, including the Turkmen. Analysts suspect Russia is carrying out these attacks to bolster the forces of President Bashar Assad, its staunch ally in the war-torn country.

Previously, YPG kicked off a ground offensive around Azaz on Saturday and Russian warplanes conducted three airstrikes on the road linking the district with the Bab al Salameh border gate in the town. Despite losing control of several villages in Azaz on Sunday, opposition groups later regained those places from YPG after fierce clashes, which left 70 civilians dead.

The YPG also targeted the opposition-controlled Qastillo alleyway in Aleppo on Monday and five civilian vehicles were reportedly hit; two people died and 13 were wounded in the attack. Sources claim Russian planes have also attacked the frontline where YPG is fighting opposition forces north of Aleppo.

YPG expanded its territories westward after taking control of Tal Abyad from DAESH in June, a region mainly inhabited by Arabs and Turkmen. However, in order to connect Kobani with the Afrin region, YPG must first take control of the DAESH-controlled Jerablus region and the Azaz region controlled by other rebels. In order to achieve that goal, the political-wing of YPG, the Democratic Union Party (PYD), had sought a rapprochement with Russia.

Two days before Russia began its air campaign in Syria on Sept. 30, Russian President Vladimir Putin said only the regime of Assad and the YPG were truly fighting DAESH. Only 11 days after Russia began its air campaign in Syria, Russian Deputy Foreign Minister Mikhail Bogdanov met with PYD Co-Chair Salih Muslim in Paris. On Oct. 21, Bogdanov also met Asya Abdullah, the other PYD Co-Chair, in Moscow. The meetings were followed by the opening of a PYD office in Moscow. On Oct. 23, Putin said the Assad regime and the PYD need to unite forces, and called on the organization to come over to the regime side in the Syria conflict.
Last Update: Dec 02, 2015 2:19 am
RELATED TOPICS