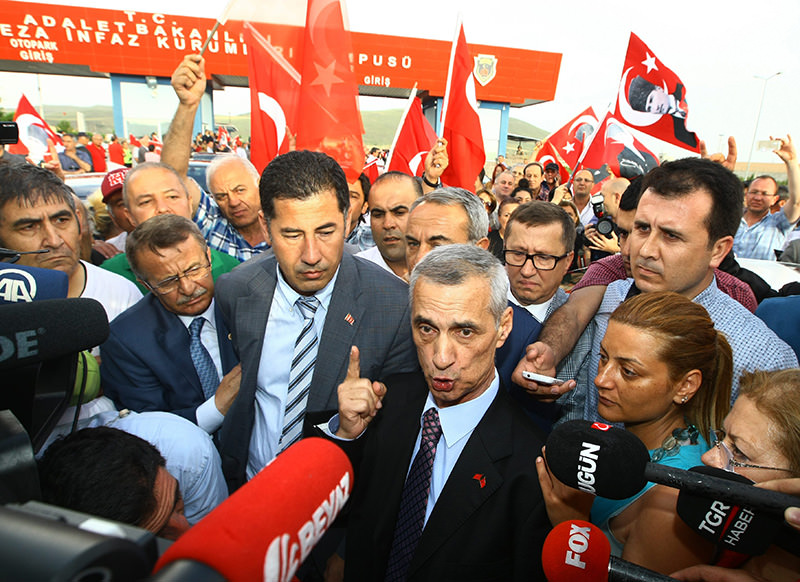 by Daily Sabah Dec 02, 2015 12:00 am
As pre-verdict arrests are again on Turkey's agenda, a Turkish court awarded a record compensation of 1,363,650 Turkish liras ($473,802) to former general and Nationalist Movement Party (MHP) deputy Engin Alan for a near 44 month false imprisonment in the "Balyoz" (Sledgehammer) coup plan case.

The decision of the Sixth Heavy Penal Court of Ankara is the highest number that will be paid in a case against false imprisonment. Public prosecutor stated during the trial that Alan was arrested by fake evidence and the unjust treatment against him was documented by expert reports and asked the court to pay the compensation deemed appropriate.

Retired lieutenant general and former commander of the Special Forces Command of Turkish Armed Forces, Alan was arrested in April 2010 during the investigation period of the Balyoz case. In September 2012, an Istanbul court announced its verdict on the case in which Alan was sentenced to 18 years of imprisonment, along with 323 other suspects of the case whom were sentenced with terms ranging from life imprisonment to six years. The Supreme Court of Appeals (Yargıtay) approved most of the verdicts in October 2013.

However, in June 2014, the Constitutional Court overruled the court decision due to violations of the defendant's rights and suspicion of fake evidence used in the case. Alan, who had spent all this period in prison, was released right after the decision. He was not released from the prison although he was elected as Istanbul deputy from the MHP in the 2011 general elections, Alan also lost his rights as a deputy due to the Yargıtay decision. In March 2015, most defendants of the case were acquitted in the re-trial of the case as digital data that the earlier case was based on was found to be fake.

Mehmet Baransu, a Gülen-linked columnist of Taraf daily who presented the evidence used as the basis for the earlier trial, was arrested on March 2015 due to suspicion of fleeing abroad. Baransu is currently awaiting the decision of the court in jail.

Many other suspects faced years-long arrests in various cases, with the Ergenekon terror organization trial, in which various politicians, journalists, academics and army generals were tried for plotting against the government, being the most prominent one. Police officers, judiciary members and journalists linked to the Gülen Movement, led by U.S. based imam Fethullah Gülen, is being accused of fabricating evidences in these cases to get rid of its opponents in its alleged aim to infiltrate into state institutions and topple the democratically elected government.
Many other cases are likely to follow suit on false imprisonment and the decision on Alan is expected to serve precedent in these cases.

The issue of has recently resurfaced with the arrests of Cumhuriyet daily Editor-in-Chief Can Dündar and Ankara Bureau Chief Erdem Gül within the scope of an investigation launched against unlawful publications in the MİT trucks case, leading to charges directed at Dündar and Gül ranging from espionage, release of secret documents and propaganda for terror organization. Opponents of the arrests argued that such measures threaten the freedom of press and the image of the country, along with unrepairable damages occurring due to restriction freedom taking place in long trial processes.

Answering to a question over the issue in a live TV interview, Prime Minister Ahmet Davutoğlu said that trials without arrest should be the basis and a reform over the judiciary is obvious.
Last Update: Dec 02, 2015 3:24 pm
RELATED TOPICS