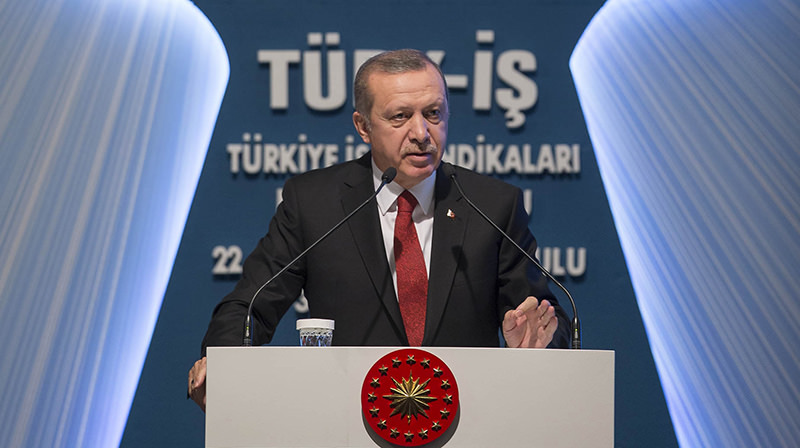 | AA Photo
by Daily Sabah with Agencies Dec 03, 2015 12:00 am
President Recep Tayyip Erdoğan on Thursday said Turkey had proof that Russia was involved in illegal oil trade with the terrorist organization Daesh in Syria, countering Russian allegations that Ankara was importing oil from the terrorists.

The Russian defense ministry on Wednesday accused Erdoğan and his family of involvement in the illegal oil trade with Daesh after Ankara's downing of one of Moscow's warplanes last month which plunged the two countries' relations into a crisis.

"In recent days a fashion led by Russia has emerged. Actually, Russia does not believe this either," said Erdoğan, referring to the alleged oil trade with Daesh.

"Look, Russia has to prove that the Turkish republic buys oil from Daesh, otherwise this is a slander," he said, while repeating that he would resign if Russia was able to prove their claim.

"Who buys oil from Daesh? Let me say it. George Haswani, holder of a Russian passport and a Syrian national, is one of the biggest merchants in this business," Erdoğan said.

In November, the US Treasury imposed sanctions on Haswani, who was also placed on an European Union sanctions list, for serving as a middleman for oil purchases by the Syrian regime from the Daesh group.

Erdoğan said Thursday "a famous Russian chess player" was also involved in the oil business with Daesh, without giving a name. "He's also in this race," he said.

The new US sanctions also apply to Kirsan Ilyumzhinov, a wealthy Russian businessman and long-standing president of the World Chess Federation (FIDE) who was formerly president of the southern Russian region of Kalmykia.

Josh Earnest, the assistant to the president and press secretary in the White House has also dismissed claims and blamed Assad for exploiting Daesh oil.

Sherko Jawdat, the chairman of the KRG Parliament's Energy Committee, said on Thursday that the oil tankers shown in the aerial photos and footage presented by Russia as evidence of the alleged trade are in fact carrying oil from the KRG to Ceyhan terminal in southern Turkey.