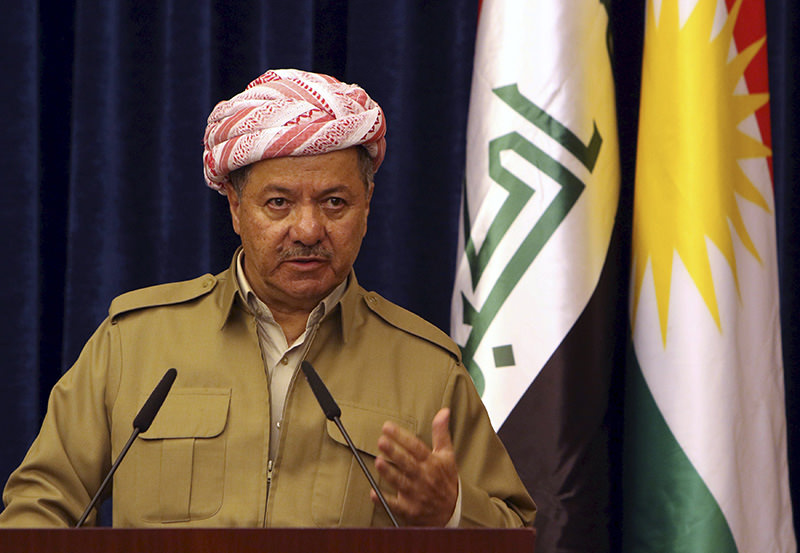 by Daily Sabah Dec 21, 2015 12:00 am
Kurdistan Regional Government (KRG) President Masoud Barzani said on Saturday that "so-called Kurds" would one day regret what they have done thanks to the PKK-affiliated Democratic Union Party (PYD) in Syria. Talking about the incident in which PYD militants attacked a ceremony on Dec. 17, Kurdish National Flag Day, held by the Kurdish National Council of Syria (ENKS), Barzani condemned the attack and said, "Even the occupiers did not do what those forces have done. One day, they will regret it and be ashamed of it."

At the event, members of ENKS wanted to celebrate national flag day by using the KRG's flag; however, PYD militants scattered the group and detained several members of the council.

In a statement issued on the KRG's website, Barzani said he appreciates those who challenge the PYD, labeling them "so-called Kurds." The flag used by the KRG is not accepted by the PKK terrorist organization and the PYD.

"Why do you not solve your problems with Turkey if you do not have enmity toward it?" Barzani asked in an official statement. The party heads the KRG.

"The KDP is used to statements by the KCK that aim to undermine its reputation," the statement read, noting that the KCK's policies are "wrong" and cause instability in Kurdish regions.

According to the KDP, the PKK has ruined hundreds of Kurdish villages, forced residents to flee their homes and has prevented the KRG from providing social services in the affected areas.

In an interview published in the al-Araby al-Jadeed daily, a military official from the KRG previously said that the PKK and the PYD are making the fight against DAESH more difficult for the peshmerga forces.

A peshmerga commander, Qassem Shasho, told the daily that they had hoped to launch an attack against DAESH at the beginning of November in Sinjar, a strategically important location in the region, but the PKK and the PYD prevented the planned attacks.
Last Update: Dec 21, 2015 3:18 pm
RELATED TOPICS