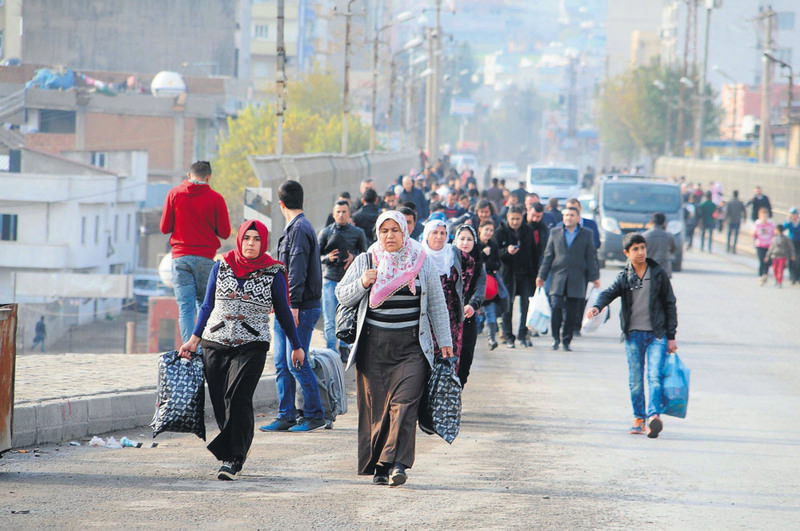 People are fleeing southeastern u015eu0131rnak province after intense clashes between security forces and PKK terrorists.
by Yunus Paksoy Dec 23, 2015 12:00 am

While thousands of people are fleeing the southeast due to increasing PKK terror in urban areas and extensive operations by security forces against them, some PKK-affiliated people are trying to use the current situation in their own favor by buying vacant houses and shops for very low prices

As intense clashes between security forces and the PKK terrorist organization's urban branch in several districts of the southeastern provinces continue at full steam, people affiliated with the PKK are allegedly using the current conflict for their benefit, seizing locals' houses and shops by force or buying them at low prices. With hundreds of thousands of people trying to flee the region due to PKK terror in urban areas and extensive operations by security forces, the PKK is allegedly threatening people not to leave the battle zones.

Otherwise, the PKK warns, they will lose their homes and shops.

A local source from Turkey's Şırnak province spoke to Daily Sabah on the condition of anonymity, saying that even though there is no legal business regarding the buying or selling houses and shops, there are rumors that PKK supporters are forcibly seizing property. "Many people cannot flee and leave their houses behind because they know they will not have them once they get back," she said.

Recently, a pro-Kurdish Peoples' Democratic Party (HDP) deputy, Pervin Buldan, posted a tweet on her official Twitter account similar to PKK threats. Buldan said: "You shall not give up and leave. You shall not quit. You may not be welcome when you want to go back one day." She later deleted the tweet.

Vahdettin İnce, a renowned Kurdish writer and author, had hinted at these claims as well when he spoke to Daily Sabah. Underlining that house prices have fallen quite sharply since security force operations began, İnce questioned who is taking advantage of the situation. "It smells fishy. Kurds do not benefit from it. There is a hidden agenda," he claimed.

Another local source from the real estate sector from the province of Diyarbakır spoke to Daily Sabah on condition of anonymity and ruled out such claims. "I can prove it if I compile legal data of houses and shops that have been sold in the last month," he said.

When asked about whether all claims regarding forced seizure or buying property for extremely low prices due to the current conflicts are false, he took a poised approach. "There are rumors. We cannot say there is nothing whatsoever in this regard," he said.

According to figures in the Turkish media, 11,354 shopkeepers have gone bankrupt in 21 provinces affected negatively by terror and 1,549 companies have closed. Over 1.5 million people have lost their jobs as well.

Apart from economic consequences, hundreds of thousands of people have escaped for their life even though the danger of losing their houses to the PKK or PKK supporters remains. On Dec. 13, thousands of teachers in Cizre and Silopi received a text message with instructions to attend "seminars" in their respective hometowns. The instructions, however, were interpreted as being based on a threat to teachers from the PKK.

Meanwhile, PKK terrorists on Tuesday opened fire on some 300 locals with rifles and rocket launchers in Şırnak. The locals were reportedly trying to flee the region due to the increasing PKK threat and ongoing operations against them. Security forces intervened and secured the locals inside a gym, media outlets reported.
RELATED TOPICS