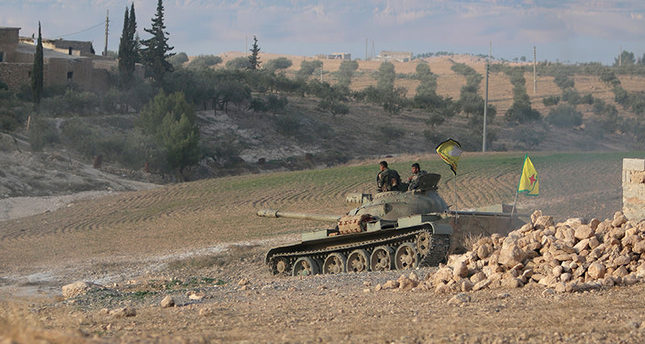 Fighters from the Democratic Forces of Syria sit on a tank during what they said was an offensive against Daesh militants to take control of Tishrin Dam, south of Kobani, Syria, December 26, 2015. (Reuters Photo)

Turkey would not look positively on Syrian forces hostile to Ankara moving to the west of the Euphrates, Prime Minister Ahmet Davutoğlu said on Monday, after a U.S.-backed alliance of Kurds and Arab rebels took a dam on the river from Daesh.

"Turkey is closely following situation in northern Syria's Tishrin area, and will not let any hostile groups cross west of Euphrates" Davutoğlu said.

Turkey has long opposed advances by Syrian Kurdish forces for fear this will lead to the creation of a Kurdish state on its border which in turn might encourage its own Kurdish minority.

Speaking at a joint press conference with his Serbian counterpart Aleksandar Vucic in the capital Belgrade where he was on an official visit, Davutoğlu said the government's current information showed that the groups that crossed the Euphrates over the weekend were Arabs, not Kurdish, forces.

Two prime ministers also touched upon the bilateral and regional relations among two countries during the press conference. "Our most important goal is, in addition to good relations with Serbia, the stability of Bosnia and Herzegovina and stability in the region," Davutoğlu said.

About EU memberships for Serbia and Turkey, he said it was very important for the 28-nation bloc itself since such a move would contribute to Europe becoming a "continent of peace".

Vucic said that Serbia as a sovereign state had friendly relations with both the Russian Federation and Turkey.

"Serbia is a small country and it does not plan to solve major world problems. I know our place very well in the world. We have good and friendly relations with the Russian Federation and Turkey and so we'll go on," he said.

"We would like all the problems to be solved between Russia and Turkey in the best way possible. Serbia is a sovereign and independent state and it is conducting its own policy," he added.

Davutoğlu also said that he loved Belgrade, which he said felt like Istanbul.

"I love Belgrade and I feel like home here, it should be same for Vucic and other Serbs when they come to Istanbul. It is an expression of love, not some historical claim. I say to all Serbs: 'Istanbul is your city, Antalya is your city,' and let everyone to call it their own city, I would be very pleased about it," he said.

During his visit, Davutoğlu will attend the opening ceremony of Turkish Yunus Emre Cultural Center and a business forum.

On the second day of his visit, Davutoğlu together with Vucic and Bosnian Prime Minister Denis Zvizdic will visit Serbia's southwest city Novi Pazar where the Muslim population is dense.