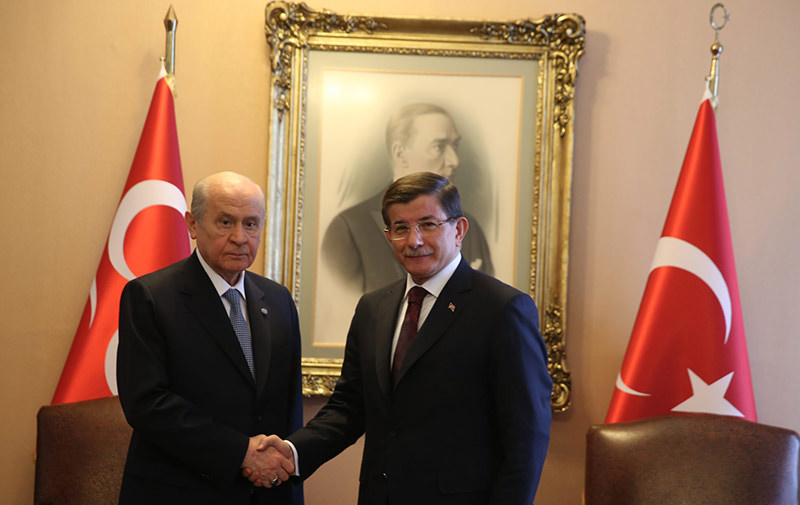 | DHA Photo
by Merve Aydoğan Jan 04, 2016 12:00 am
Prime minister and chairman of the ruling Justice and Development Party (AK Party), Ahmet Davutoğlu, has met with chairman of the Nationalist Movement Party (MHP), Devlet Bahçeli on Monday to discuss the establishment of a new constitution as well as amendments to parliamentary bylaws. Davutoğlu previously met with the main opposition Republican People's Party (CHP) Chairman Kemal Kılıçdaroğlu last Wednesday when the two leaders agreed to revive a conciliation commission for a new constitution after their two-and-a-half-hour meeting.

Sources close to the MHP have said that Bahçeli will request that Davutoğlu and the delegation present at the meeting have a camera recording the proceedings to prevent any misunderstanding by the public. The MHP delegation will have the technical requirements ready for the camera recording, but in the case that the AK Party delegation rejects the request, one deputy from the MHP delegation will take the minutes of the meeting. Speaking to members of the media after the meeting with Kılıçdaroğlu, AK Party spokesman Ömer Çelik said a comprehensive evaluation would take place after meeting with the MHP regarding parliamentary bylaws, a new constitution and action plan reforms.

Davutoğlu and Bahçeli's meeting will take place at Parliament at 2:00 p.m. when officials are expected to address a new constitution and parliamentary bylaws as well as recent developments regarding Turkey's downing of the Russian aircraft that violated Turkish airspace on Nov. 24. In addition to the crisis with Russia, they will discuss the latest developments in the crises in the entire region, focusing especially on Syria. Davutoğlu is also expected to give details and information regarding the ongoing incidents in the eastern and southeastern provinces of Turkey due to the PKK attacks. While discussions on the PKK trenches and counterterror operations continue, Davutoğlu will also seek support from Bahçeli for the government's efforts to fight terrorism, and urge Bahçeli to make a public call for unity.

Shortly after the meeting with Davutoğlu, the MHP will go on a retreat in Kızılcahamam from Jan. 8-10 and will assess the situation with regard to the intra-party conflicts about holding an extraordinary congress. Former Parliament MHP Deputy Chairwoman Meral Akşener recently announced that they have attained enough signatures to call for an extraordinary congress.
Last Update: Jan 04, 2016 4:11 pm
RELATED TOPICS