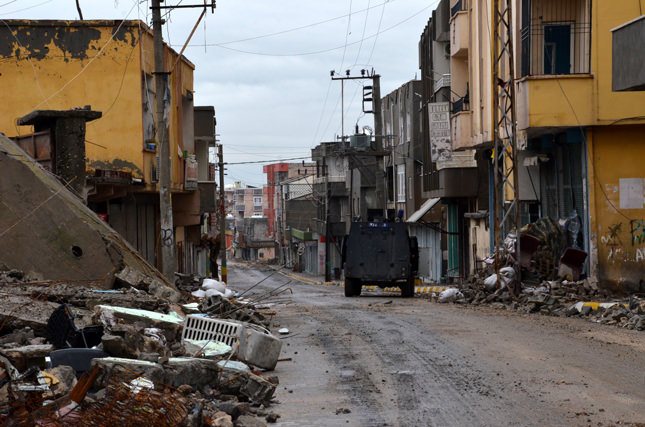 by Daily Sabah with AA Jan 08, 2016 12:00 am
The Turkish military has said a total of 326 PKK terrorists have been killed in counter-terrorism operations in southeastern Turkey since Dec. 15 as 58 suspects were captured in the southeastern district Silopi of the Şırnak province while attempting to escape in women's clothing.

In a statement on Wednesday, the Turkish General Staff announced that 58 PKK terrorists were captured in the Silopi district of Şırnak province, located near the country's border with Syria and Iraq, while trying to escape police as they changed into women's clothing in an attempt to disguise themselves.

The statement also said that nine more PKK terrorists were killed on Tuesday in southeastern Diyarbakır and Şırnak provinces where operations continue amid curfews.

The army said that two PKK terrorists were killed on Tuesday in Diyarbakir's Sur district, under curfew since Dec. 2. Ongoing operations have killed 62 terrorists in Sur so far.

In Cizre, a town close to the Syrian border in Şırnak province, four terrorists were killed. The total number of the terrorists killed in the ongoing operations has reached 207 in the town, which is also under a security curfew.

Twenty-one handmade explosives were disposed of. A number of shotguns, ammunition, a drone and some medical equipment were also recovered.

According to the General Staff, three other terrorists were killed on Tuesday in Silopi district of Şırnak province, which brought the total number of PKK deaths to 36 in the area.

Three barricades were removed and 46 handmade explosives were disposed of during the operations.

In the Patnos district of eastern Ağrı province, six people were detained on Tuesday on charges of aiding and abetting PKK terrorist organization.

The suspects were alleged to have illegally crossed into Turkey from Syria.