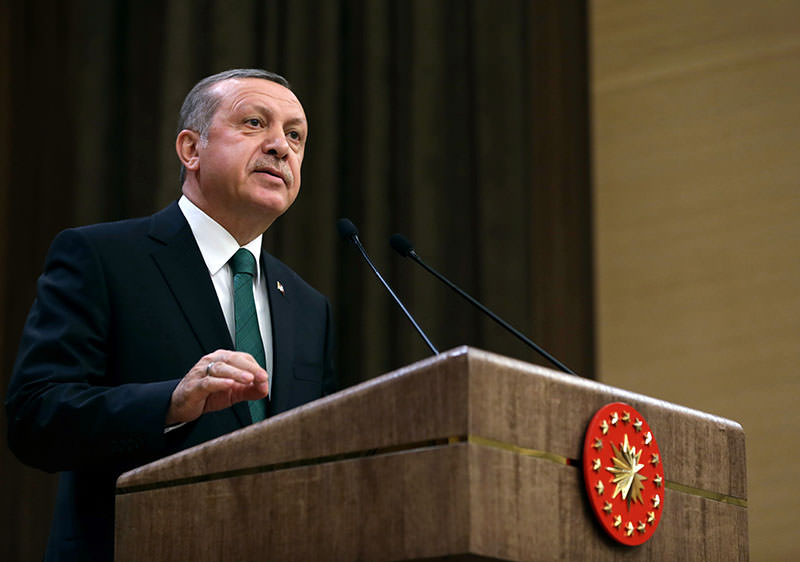 | IHA photo
by daily sabah Jan 10, 2016 12:00 am
President Recep Tayyip Erdoğan released a statement on Sunday celebrating 'Working Journalists' Day', which is celebrated annually to mark a law passed on Jan. 10, 1961 [Law No. 212] that protects the rights of journalists.

The president said in his message that the press needs to be independent.

"As the extent of freedom of those working in the press, journalists, news people increases, then the democracy of the country becomes more powerful," President Erdoğan stated.

Erdoğan, however, underlined that freedom of press should not be also perceived as "irresponsibility."

"What is of essential is that the people are provided with unbiased and correct news," he said.

The president stated that big, powerful, and rooted countries have press organs that are effective, multiple-voiced, colored and equipped with modern technology. He said such diverse media organs embodying unique points of views are important for formation of a healthy public opinion.

Another point President Erdoğan emphasized was the difficulty of differentiation between correct and incorrect news in today's circumstances, especially with use of diverse media technologies, such as social media.

The president said that as much as social media provides news in a fast way and forms public opinion, it has also been utilized by some media organs to form a black propaganda platform.

"As much as providing correct news, sorting out these black propaganda materials has also entered into the obligations of our journalists," the president said.

Erdoğan finished his sentences by wishing that the media organs continue their work "being aware of their responsibilities" and strengthening Turkey's democracy as well as its unity and solidarity.

'Working Journalists' Day', which was celebrated as a "holiday" until the March 12, 1971 military intervention, has since been observed only as a "day" with the so-called "coup by memorandum" that brought restrictions to the freedom of press.
Last Update: Jan 10, 2016 2:55 pm
RELATED TOPICS