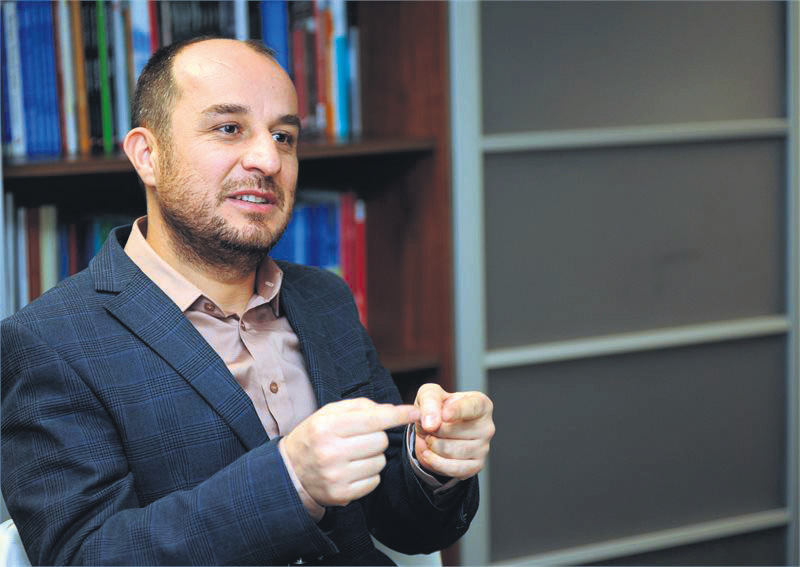 DS: Firstly, could you elaborate on why a new constitution is required?

Why the need? First and foremost, the current constitution is heavily influenced by the September 12, 1980 military coup. The oppressive features of the constitution continue to persist, even after almost two dozen amendments. Therefore, a new constitution is needed to eliminate these authoritarian features.

Secondly, nearly half of the content was amended; thus, there is an issue of inconsistency and incompleteness. While some of the decrees are the product of the military coup, the rest consists of more democratic and libertarian decrees, which are due to EU harmonization process. It is inconsistent and similar to a patchwork.

The previous constitutions were prepared and promulgated after wars and military coups by the ruling elites. For the first time, there is a possibility for a constitution which can be prepared according to the public opinion. Thus, the preparation of the constitution is as important as its contents. If it will be done with the public's participation into the discussions, the new constitution will definitely have democratic characteristics. It is not possible to consider a constitution democratic if it does not include the people during its preparation. This was the issue with the 1961 constitution, as it was prepared with the support of a certain group of bureaucrats, excluding the public and many other political actors.

DS: How will a new constitution affect the lives of the people?

DS: Last week, the political parties decided to establish a conciliation commission for a new constitution. However, the previous commission established after 2011 was unsuccessful. Why did the previous one failed? Is the same failed structure being reestablished?

The conciliation commission of 2011 was a significant experience. For the first time, there was a process consisting of public negotiations, thus a bottom-up constitution making process. After a lengthy process of data collection and participation, opinion of the public was gathered. This is called a negotiatory constitution-making process. It can be explained through an hourglass metaphor. All opinions are gathered from the wide part of an hourglass, which is the public, goes through the narrowest segment, the parliament, to be reintroduced to the public as the new constitution. It could have been the first constitution to be made with this methodology in our country. Therefore, the conciliation commission experience was significant in this manner; however, there were some errors in the establishment of the said commission. All of the parties were equally represented, regardless of the vote they had received, causing an imbalance.

Another issue was about the decision making process. Unanimous vote was required to pass a clause. In my opinion, this was a huge mistake; as absolute consensus is impossible, it should not be sought. It is better however, to have as much support for the constitution as possible. Indeed, the commission was able to agree on 60 clauses, before getting mired in more significant and controversial clauses.

DS: Could you tell us about the contents of these 60 clauses?

They are about basic freedoms and rights; therefore, they were not discussed that much, as all of the parties were advocating it. Yet, they were not able to agree on clauses about citizenship, education in the mother tongue, and religious freedom, which were among these 60 clauses.

DS: Will the new commission follow the same structure as before?

From what we have understood after the meetings Prime Minister Davutoğlu held with the CHP and the MHP, a commission will be re-established and in this commission, all parties which are represented in the parliament will have an equal number of delegates. Therefore, it is similar to the previous commission in this manner. However, we do not know how the voting process will be undertaken. Yet we understand that the commission will continue from where it left off.

DS: In your opinion, how should the constitution-making process progress?

Instead of a consensus, the majority of the votes could be sought and a new methodology for making a constitution could be determined. If the commission fails once again, instead of four political parties, the ruling AK Party could prepare a draft with the main opposition party CHP. Then they could ask other parties to participate in the conciliation process. As the AK Party and CHP together represent 75% of the public, it would mean a broad-based conciliation. Moreover if we suppose that this new constitution is voted upon in a referendum, the support may exceed 75%, which is adequate support for a constitution. This method has been previously used by parties in Turkey, mostly in the process of implementing amendments. I believe this method could be useful.

DS: Numerous groups of people claim that all of the issues in Turkey derive from the constitution; thus a new constitution would resolve all issues. What are your thoughts on this subject?

A new constitution will definitely not solve all of our problems, but it may be helpful in solving the most significant ones. For example, a new constitution cannot by itself solve the Kurdish problem and the terrorism issue; yet a constitutional citizenship introduced with it may pave the way to resolution. Moreover certain laws which are problematic could be amended without making a new constitution, such as the political parties' law, and the electoral law. These are already included in the government's action plan. Therefore, there are some laws that could be changed with less resistance and without a new constitution.

DS: Is the new constitution being discussed because of the AK Party's proposed transition to a presidential system?

DS: The political parties represented in the parliament have differing perspectives about the presidential system. In your opinion, is it possible to make a new constitution without the mention of a presidential or an alternate system?

DS: Considering the current discourses of political parties, do you believe conciliation is possible?

We can say that, regarding certain topics, all four parties will have a hard time to find agreement. Considering their discourses, along with their party programs and comments on issues, it can be said that that they will not be able to produce a draft constitution. This is due to the red lines they are drawing. For example, it is not possible to have a document including the Kurdish problem and education in the mother tongue, on which both the MHP and the HDP will agree. Moreover, the PKK's current incursions into the cities and active conflicts constitute an obstruction for the making of a new constitution. Therefore the resolution of conflicts, along with HDP distancing itself from the PKK, can be a start; however, to see all four parties creating a draft seems highly unlikely.

DS: As a constitutional lawyer, are you satisfied with this new process?

I am hopeful; yet as I have said, I find the aforementioned parties producing a draft highly unlikely. If this process becomes unsuccessful, an alternative with two parties can be a better option. There are many issues about the current method of constitution-making.

DS: The ruling party had proposed that the commission's working plan should be determined, which met with resistance by the opposition parties. How do you evaluate this proposal?

Certain time limitations are proposed. Actually, the previous commission was also going to make a constitution in four stages, and there was set time limits for each one of them. However even with a schedule, a constitution could not be produced. Scheduling is important to keep a process from stagnation. Otherwise there may be negotiations going on for years, causing the chance of a new constitution to be lost. Setting schedules is beneficial for both parties and the constitution making process itself; as without a schedule, it may never yield a result.

DS: There were legal reforms foreseen as a part of the government's yearly action plan. Could you please talk about the works planned regarding this subject?

There are reforms which include regulations as important as a new constitution, both in the government program and the action plan. These include the political parties' law, the revision of the electoral law, political financing and transparency, and other legal issues. One of the most prominent is the establishment of regional courts of justices, as we only have courts of justice and a supreme court. Regional courts of justice are essential for fair trials, which are proceeding in two stages. This means that after one's trial at a court of justice, one can pursue a retrial in the regional court of justice; thus, they are tried twice, minimizing wrongful convictions. This has been advised for Turkey for many years. The government announced that regional courts of justice will be established and begin functioning by July. Moreover to prevent lengthy proceedings, a system will be established, informing the plaintiff about when the trial will conclude. There are two draft laws about protection of personal data and the protection of state secrets. There will be many reforms which are part of both the legal reform and the EU accession process. Moreover, there are also certain regulations regarding the Alevi population, such as allowing cemevis [Alevi houses of worship] to be defined as cultural centers.
RELATED TOPICS