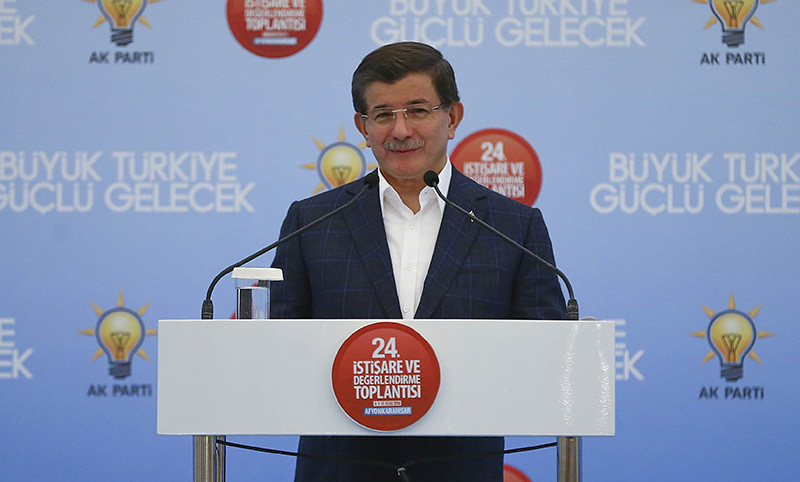 | Sabah Photo
by Merve Aydoğan Jan 11, 2016 12:00 am
The ruling Justice and Development Party (AK Party) held its 24th Advisory and Assessment retreat in Afyonkarahisar from Jan. 8 to Jan. 10. At the retreat Prime Minister Ahmet Davutoğlu underlined the necessity for a new constitution and said: "The AK Party will not take any step back from establishing a new constitution." Meetings at the retreat began on Saturday with opening remarks from Davutoğlu, and continued with assessment and advisory sessions that included the topics of combatting terrorism, domestic security, developments in foreign policy, government programs and reforms, the global economy and developments in Turkey.

Addressing the attendees, which included both current and former AK Party deputies, Davutoğlu began by explaininig the five critical turning points that the party had experienced in the past year. Davutoğlu said: "Since its establishment, the AK Party greatly values advisory and assessment, thus, through these retreats we rejuvenate our unity and solidarity. In 2015 we experienced two important elections in which our people gave a clear message to us." He said the June 7 elections was one of the critical turning points for the AK Party and that the party had received the message and did not leave the country without a government. Davutoğlu described the Parliament speaker elections following the June 7 election results as the second turning point, saying: "The AK Party had proved its unity and stance against the opposition bloc."

He said the third turning point was correctly assessing the June 7 results, the fourth turning point was the terror attacks in the southeastern province of Suruç and the fifth turning point was the Ankara suicide attacks, which he said aimed to manipulate voters ahead of the Nov. 1 snap elections and cause chaos throughout the country. In his speech, Davutoğlu strongly emphasized the necessity for a new constitution and said it will include freedoms and citizens' rights.

On Friday, Turkish Parliament Speaker İsmail Kahraman called for the establishment of a committee to draft a new Turkish constitution to replace the 34-year-old Turkish Constitution, written at a time when Turkey was under the rule of a military tutelage. Kahraman's remarks came during a press conference and were made after abroad consensus was reached among political parties: that Turkey's constitution needed revision. "I will send letters to the heads of the AK Party, Republican People's Party (CHP), Nationalist Movement Party (MHP) and the Peoples' Democratic Party (HDP)," said Kahraman.

In 2013, Turkey's parliamentary parties formed a commission to revise the constitution introduced in 1982, following a military coup led by Gen. Kenan Evren, which seized power in 1980. The commission reached an agreement on only 60 articles before it was disbanded.

Commenting on the recent DAESH attacks on Turkish troops in Iraq's Bashiqa camp, Davutoğlu said they clearly show that the security measures taken in Iraq were needed. He further said that Turkey will continue to combat terrorism. In this regard, during the session on terrorism and domestic security moderated by former Parliament speaker Mehmet Ali Şahin, Interior Minister Efkan Ala gave a presentation to the attendees on counterterrorism operations in southeast Turkey.

Davutoğlu gave closing remarks on the last day of the retreat and congratulated all members of the media on Journalists' Day with his wife, Sare. He said that he hopes the media provides accurate and good news rather than supporting terrorism. He said the attendees had discussed the government reforms that are to be realized in the upcoming period. Additionally to the reforms, the services that are to be applied for the country have also been discussed as he had said.

Asserting that the AK Party stands for peace and unity, Davutoğlu added that the deputies have been informed and provided input on the party's goals for the new government term. Davutoğlu said AK Party members, deputies and all ministers have comprehensively discussed all matters concerning Turkey.

With security concerns arising from the illegal Gülenist video and audio recordings that contain private images from areas inside the Kızılcahamam Asya Thermal hotel, the AK Party retreat was closed to the public due to the possibility of extortion that could threaten government officials. Media outlets were only granted access to the prime minister's opening and closing speeches.