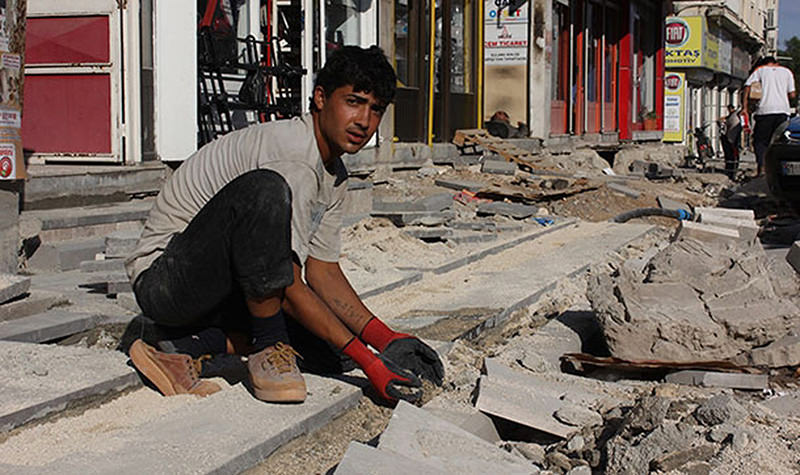 by Mehmet Çelik
Jan 16, 2016 12:00 am
The International Organization for Migration (IOM) welcomed Turkish government's decision to grant Syrians refugees access to work permits in Turkey in a statement released on Friday.

The government passed the law, Regulation on Provision of Work Permits for People under Temporary Protection, on Friday, which will allow the Syrian refugees who are officially registered under temporary protection in Turkey.

"This is excellent news for both Turkey and the Syrians living in Turkey. It provides vulnerable people with a legal avenue to be able to financially support their families – something that is a priority for most of us. There is still work to be done, but this is a welcome step towards integrating Syrians into the labour market," said Lado Gvilava, IOM Turkey Chief of Mission, the statement cited.

"We work closely with the Turkish government to advise and support on the drafting and implementation of migration-related legislation and policies," Gvilava added.

The new regulation, published in the official government gazette, allows the Syrians who have been officially registered in the country for at least six months the access to legally work in the country.

"We are trying to reduce the pressure for illegal migration by giving Syrians in Turkey work permits," The European Affairs Minister Van Bozkır said on Monday.

Under the new law, employers will have to maintain a 10 percent quota for the Syrian refugees employed in their workplaces. Seasonal workers, who mostly work in the agricultural sector, are to be kept outside of the quota.

The new regulation will also help stopping the flow of refugees crossing to European countries through illegal channels.

More than 2.2 million Syrians have sought asylum in Turkey since the beginning of the civil war in 2011. Previously, the refugees were able to work in the refugee camps if they held professions such as medical doctors or teachers.
Last Update: Jan 16, 2016 3:16 pm