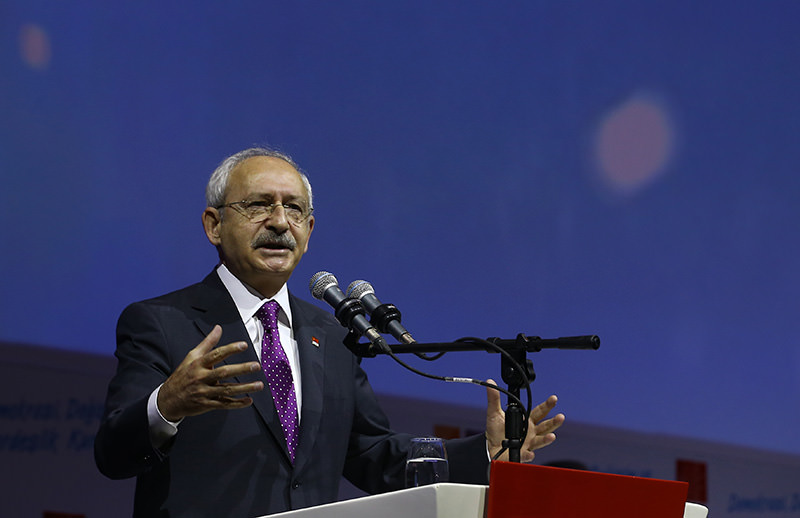 Kılıçdaroğlu was re-elected with 990 votes of the 1,238 who cast their ballots during the party's 35th Annual Congress held in the Turkish capital Ankara. A total of 248 votes were declared invalid.

The party had a total of 1,275 delegates, but 37 delegates did not cast their votes.

Following the party's Nov. 1 failure to win in the sixth election held under the leadership of Kılıçdaroğlu, who has been leading the party since May 2010, intra-party critics have surfaced against him and several figures have announced their candidacy for the chairmanship, such as former Istanbul deputy Umut Oran, Yalova deputy Muharrem İnce and İzmir deputy Mustafa Balbay.

Just two days before the congress, Oran and İnce declared their withdrawal from the rivalry, since they were unable to collect the required number of signatures from the delegates.

During the congress, dissident candidate Balbay also failed to collect enough signatures to run for the chairman position and Kılıçdaroğlu was the only candidate left for leadership in the party congress.

The party established by Mustafa Kemal Atatürk, the founder of the Republic of Turkey, the social democratic CHP is the biggest opposition party in Turkey, with 134 members in the 550-seat Turkish parliament.

The CHP received 25.31 percent of the vote in the Nov. 1 elections. Many CHP figures criticized the party's vote share after the elections, saying that maintaining its 25 percent vote share is not a success, referring to the party's votes increasing by only a miniscule amount from the previous elections held in June.

During his speech in the congress, Kılıçdaroğlu said on Saturday that regardless of its source, terrorism is a crime against humanity.

"We, as CHP, regardless of where it comes from, its aim and motives, are against terrorism. Terrorism is a crime against humanity," he said.

Kılıçdaroğlu also expressed support for constitutional reform and said it was a necessity.

"The coup laws should be abolished and a libertarian democracy should be brought to Turkey," Kılıçdaroğlu added.

He called on Prime Minister Ahmet Davutoğlu and said that the CHP will support reforms to get rid of the repressive constitution, which is a legacy of the 1980 coup d'etat.

Although Kılıçdaroğlu pledged support for a new constitution, he reiterated once again that the CHP will not support a presidential system.

After winning the November 1 general elections, Prime Minister Ahmet Davutoğlu has been holding talks with opposition parties to discuss changing the constitution, as the AK Party does not have necessary seats in the parliament to make constitutional amendments without support from other parties.
Last Update: Jan 17, 2016 4:07 pm
RELATED TOPICS