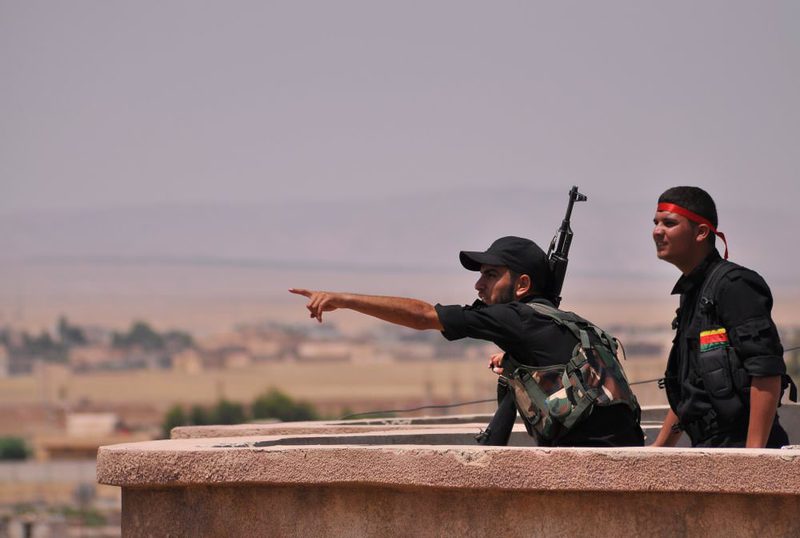 A report published by the Syrian Network for Human Rights (SNHR) says that the PKK-affiliated PYD has committed human rights violations in multiple ways, including ethnic cleansing and abusing women, children and media workers

The Syrian Kurdish Democratic Union Party (PYD) has committed significant human rights violations in north and northeastern Syria, including "ethnic cleansing massacres," since the withdrawal of government forces in 2012, according to a report published on Monday by the London-based Syrian Network for Human Rights (SNHR).

The PYD is the Syrian affiliate of the PKK, which is listed as a terrorist organization by Turkey, the EU and the United States.

Since taking over remote regions of northern and northeastern Syria from DAESH, the report says the PYD and the Kurdish Self-Management (KSM) forces committed major human rights violations, including extrajudicial killings, enforced displacement, arbitrary arrests and disappearances along with other violations against women, children and media personnel.

According to the report, the PYD has sought to ethnically cleanse towns under its control that were mostly inhabited by Arabs.
Three massacres that took place in four villages in al-Hasakah resulted in the deaths of 91 civilians, including 17 children and seven women, the report says.
The SNHR said that KSM forces arbitrarily arrested no fewer than 1,651 people, including 111 children, since the beginning of the uprising in Syria in early 2011. Among them was Affan Jomaa al-Aboush, 16, whose body, which showed signs of torture, was found near a KSM military checkpoint on Dec. 17, 2014, only five days after KSM forces arrested him at his home.

According to the report, 42 women, including 33 adults and nine adolescents, have died at the hands of PYD forces since March 2011, mostly as a result of "random shelling or through direct firing during raiding campaigns or sniping."

The SNHR also documented the arrest of 88 women, including 34 girls under the age of 18, between January 2014 and October 2015. The arrests, the network said, had been aimed at forcibly recruiting women.

KSM forces reportedly killed at least 51 children from January 2014 until the end of 2015 while 111 others were subject to arbitrary arrest between January 2014 and November 2015, the report says.

The SNHR also documented the forced recruitment of 1,876 children in different parts of Aleppo and the al-Hasakah suburbs.

The report also cites 24 cases of arrest or abduction of media activists, all of who were subsequently released.

Rights breaches committed by KSM forces had also led to the displacement of tens of thousands of al-Hasakah residents, mostly Arabs, while dozens of other towns are now empty, according to the report.

Together with Arabs, other ethnic groups like Turkmens have also been targeted in al-Hassaka, according to the SNHR.
In December, the head of the Syrian Turkmen Assembly, Abdurrahman Mustafa, said: "It has already been documented previously by international reports that the PYD has committed war crimes and violated human rights. They will do the same on the Azaz-Jarabulus line. We have to defend our lands at all costs," he said, adding that the PYD is planning to take Manbij and threatens almost 50,000 Turkmens living in the town.

Amnesty International released a report in October 2015 that cites similar accusations against the PYD's armed People Protection Units (YPG) concerning non-Kurdish inhabitants in areas under PYD control in northern Syria. The report said that some YPG actions amount to war crimes and that non-Kurdish, mostly Turkmen and Arab, inhabitants of villages in the de facto autonomous Kurdish administration were forced out of their homes.
Amnesty quotes Ciwan Ibrahim, the head of the Kurdish internal security force Asayish, as saying that there had been forced displacements, but that they were "isolated incidents" and that civilians had been moved "for their own safety." However, the report says that the findings show the forced displacement mostly concerns non-Kurdish villages captured by the YPG. The group interviewed 37 individuals who said they had experienced YPG abuse in al-Hasakah and Raqqa provinces.
Last Update: Jan 19, 2016 9:43 pm
RELATED TOPICS