Erdoğan calls on PKK youngsters to surrender, unite with families 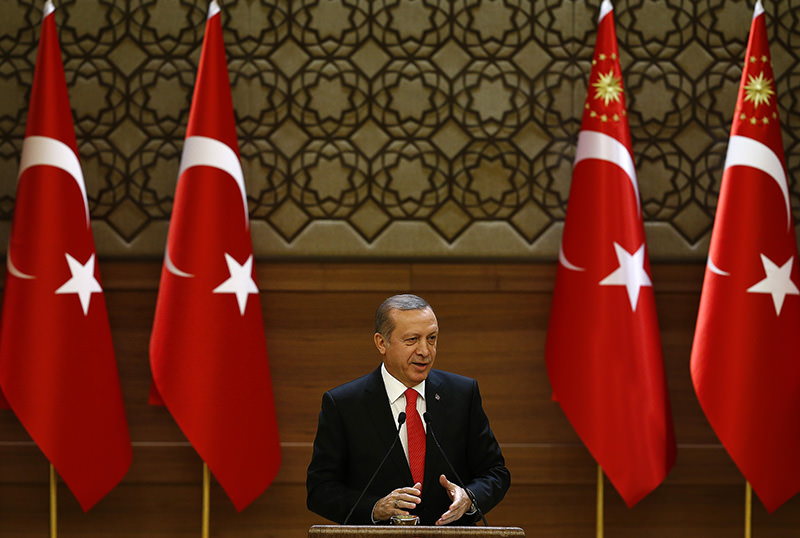 | AA photo
by daily sabah
Jan 20, 2016 12:00 am
President Recep Tayyip Erdoğan on Wednesday called on the PKK terrorist organization's youngsters to surrender themselves and unite with their families before it is too late, saying that the government will embrace those regretful of their actions with "compassion".

The president's call came during the nineteenth gathering with mukhtars, or village headmen, at the Presidential complex in Ankara.

"Those who carry weapons, and those who support them, will pay for this betrayal. If those involved in such actions feel sorry and surrender themselves to our security forces, our government and nation will open their arms to them in compassion," the president said.

He advised the youth in the PKK terrorist organization to "correct their mistakes" before it is too late. "We want to see you as children obedient to your families, country, and nation, not as lifeless bodies on street corners, mountains, river beds and as prisoners behind bars," Erdoğan said.

The Turkish president reiterated during his speech that security forces will "clean the region" of the terrorists and ensure public order, after which the officials will be in touch with the residents for a "permanent solution."

"We will together determine what is to be done for a permanent solution to prevail [in the region] and carry this into effect," he said.

The government has intensified counterterrorism operations in southeastern Turkey following attacks carried out by the PKK. The group announced on July 11, 2005 that it had decided to end a two year cease-fire with the state.

On Wednesday, Erdoğan laid out his plan to reach the solution regarding terrorism in southeastern Turkey. "In the upcoming period, neither the subversive terror organization [PKK], nor the party under its control [referring to Peoples' Democratic Party, HDP] will ever be addressed, that era is over," President Erdoğan said.

The president ruled out any chance that the government would return to the negotiating table with the HDP and the PKK.

'Why would I take this person seriously?'

President Erdoğan also responded to Republican People's Party (CHP) chairman, Kemal Kılıçdaroğlu, who made recent statements questioning his honor and dignity. "Why would I take this person seriously?" Erdoğan asked, adding that he had to respond to Kılıçdaroğlu because he had targeted his family.

Stressing that it is pointless to answer "people deprived of honor and dignity," Erdoğan slammed Kılıçdaroğlu's alleged support for the terrorist organization.

The president also recalled Kılıçdaroğlu's time at the Social Security Organization (SSK), when he was the director. Suggesting that Kılıçdaroğlu had bankrupted the institution, Erdoğan said one cannot estimate his level of intelligence since he has not achieved any concrete work.

'Are academics in favor of Turkey's unity?'

Erdoğan also touched upon a recent petition signed by 1,128 academics that declared describing security operations against the PKK in the country's southeast as a "massacre".

The president called on the academics and those who support them asking, "Are you on the side of Turkey's unity and solidarity, or not? Give a genuine answer to this question."

"If you favor the country's unity, then why are speaking with the jargon of the terrorist organization that is making our citizens' lives miserable and attacking our security forces?" the president asked.

"Is it worthy of academics and intelligentsia to become tools for a worthless terrorist organization?" Erdoğan asked, adding that he is disgusted with those who issued a "political fatwa" on behalf of the PKK.

Erdoğan also contended that the academics have carried out no valuable academic research. "The old Turkey was run by a bunch of lumpen proletariats who call themselves intelligentsia and academics," he added.

In the petition, 1,128 academics working in various universities across Turkey called for an end to the security forces' ongoing counter-terrorism operations [in the southeast] amid curfews, accusing the state of violating human rights and of conducting a "deliberate and planned massacre. The figures call themselves the 'Group of Academics for Peace.'
Last Update: Jan 20, 2016 11:34 pm