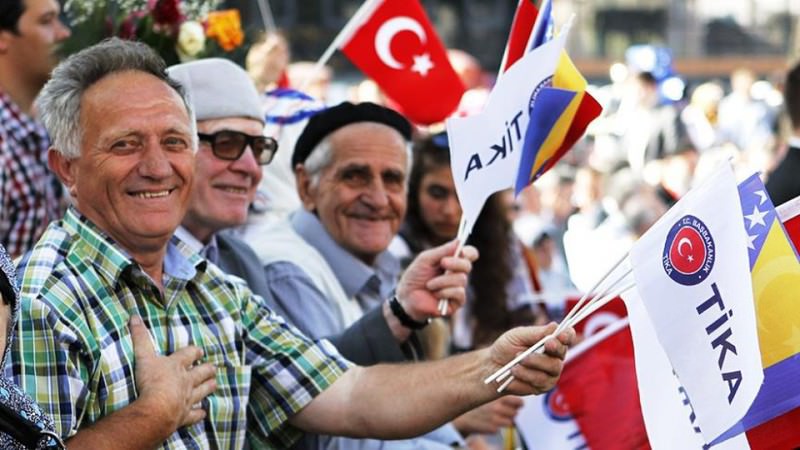 Ankara's 'vision-focused' policies in the Balkans, which is based on high-level dialogue inherited from hundreds of years of historical and cultural ties, remains the strongest alternative to deepening religious extremism and ethnic tensions in the region

The Balkans are crippled with many chronic issues including clashing minorities, deepening religious and ethnic divisions, and the Dayton Agreement, which ended the bloody wars that erupted following the breakup of Yugoslavia but imprisoned the region in "a political deadlock." Still, the Balkans are on the verge of a new process which will either lead to "permanent and institutionalized stability," or a new wave of violence.

The intervention of global actors in Balkan countries on grounds of "stability" has, in the final analysis, taken a back seat to strategic goals such as an alliance axis and the procurement of energy routes.

Turkey has deeply rooted historical and cultural ties with the Balkans, and has identified the region as one of the key elements of its foreign policy; continuing its activities in the region with an all-embracing perspective, one that is, in the words of Prime Minister Ahmet Davutoglu, "not crisis-based but vision-focused."

These activities are pursued in a way that extends beyond all the current areas of conflict despite the "jarring voices" that have emerged as a result of recent political polarization and hidden agenda.

Policies pursued by Turkey in the region are established based on a multilateral approach and include participation in international peace initiatives. According to the Turkish Foreign Ministry's 2013 strategy, the Balkans policy is being shaped on three bases: "High-level political dialogue, safety for all, maximum economic integration" and the "preservation of the region's multi-ethnic, multicultural and multi-religious social structure."With this approach, Turkey is concentrating efforts on the social and cultural dimensions of the policy, alongside economic activities. Turkey's focus to these soft power instruments is being perceived by the region's people as a well-intentioned step toward increasing confidence and stability.

Nevertheless, the criticisms being directed towards Turkey's policymaking – as well as accusations that are not objective of reality – regarding the threat from DAESH in the Balkans which has been on the rise, can only be explained by the covert strategic war being waged over alternative energy routes in the Balkans and, on the other hand, by the competition between the driving powers in local economics, politics and culture. However, experts think that this kind of approach carries the danger of being converted to black propaganda and further deepen the divisions in the fragile, multiethnic and religions structure.

TIKA's activities in the Balkans

Turkey, like the U.S., Germany and the Vatican, provides educational, medical and humanitarian services to the Balkans, as well as restoration efforts and opportunities for employment in the Balkans through various institutions.

The Turkish Cooperation and Coordination Agency (TIKA), one of the institutions whose presence in the Balkans is most visible, has a wide field of activity in the region. According to an activity report recently released, the sectorial distribution of projects and activities carried out by TIKA and their proportional values are as follows: 45 percent in the health sector, 20 percent in the administrative and civil sector, nearly 16 percent in the education sector and 15 percent in cultural cooperation and restoration efforts; with 3 percent of sectorial distribution being allocated to the water supply and water sanitization.

Churches and monasteries are also being restored

The fact that TIKA is conducting public works and restoration projects for Christian places of worship – for the countries religious minority – is another key sign of TIKA's efforts in the region to take an all-inclusive approach devoid of any discrimination. Within this framework, a restoration company commissioned by TIKA upon the request of the Republic of Macedonia National Conservation Center has overseen land surveys and other relative works at the Saint George Church near the Macedonian city of Kumanovo.

TIKA also established surveillance, fire alarm and response systems for the Fojnica Fransisken Monastery in Bosnia and Herzegovina, conducted environmental planning for the restoration of the Macedonian Orthodox Church Dormition of the Most Holy Virgin Mary, which hosts Christmas and Easter services for the Orthodox Christian community in the country.

It is remarkable that other actors actively working in the region are usually conducting efforts to achieve a goal that prioritizes the welfare and interests of a certain group. For instance, Christians in Kosovo constitute five percent of the Kosovar community, and the Holy See are providing support to the government in opening a number of places of worship so that the Christian minority could properly perform their religious services.

Accordingly, a cathedral was built in 2010 in memory of Mother Teresa – a key historical figure for Christian Catholics in the region. Moreover, the Catholic NGO, Caritas, is in ongoing efforts which include the provision of social support projects for Kosovar Christians; namely, in the sectors of education, health and employment, with its Ferizaj-based organization that consists of 153 personnel and 400 volunteers.

U.S. efforts in the Balkans

Most of the projects initiated by the U.S. – one of the most influential countries in the Balkans – are completed through the United States Agency for International Development (USAID) and focus on health, education and employment.

The USAID conducts support investments in Serbia, Macedonia and Montenegro via the Support Fund for Micro entrepreneurs; also known as the SEAF South Balkan Fund which was launched in 2005 in the Balkan countries. One Serbia-based supermarket chain, GOMEX, is a key investment which the USAID made via SEAF in the area of employment. The USAID also acts in cooperation with other NGOs in the region by providing financial support for the NGO titled "Balkan Sunflowers," which conducts cultural and educational efforts, together with the Rome Education Fund founded jointly by the World Bank and Hungarian businessman. George Soros.

Mosque restoration is a fourth priority

Long used as a pretext for criticism against Turkey's rising influence and efforts in the Balkans, the effort to restore a mosque is the top fourth priority for TIKA – one which David Phillips, U.S. academician and former advisor to the Department of State for the Huffington Post – mentioned in one of his latest articles.

Phillips mentions in the article that TIKA's restoration efforts to establish places of worship that are among the key elements of historical and cultural heritage in Kosovo – where ninety percent of the population is Muslim – with a baseless accusation that "religious radicalism spreads via these places of worship."

The timing of the article – as it was written just the day after the Serbia-Turkey Business Forum held on Dec 28 last year – is one of Turkey's key strategic initiatives in Balkans, arousing suspicion that there might be some other motives behind his accusations.

Experts and academicians who know and monitor the region closely all agree that Turkey's activities in the Balkans have critical importance for the prevention of radical tendencies; unlike criticism and evaluations.

Within this perspective, Joseph J. Kaminski, an American associate professor at the International University of Sarajevo in Bosnia, said these kinds of counter-discourses have been increasing along with the strengthening presence of Turkey in the region.

"The number of Kosovan Muslims joining radical-prone groups is not high. The reason for this is the Kosovan Muslims' sense of religion is based on the Hanafi legal school, along with the fact that the religious tendencies triggering the extremisms have been balanced by the temples reconstructed by Turkey as a Hanafi-based country," said Kaminski.

Underling that his impressions of the field also confirmed his opinions, Kaminski said, "Turkey has a rich heritage across the Balkans. I was in Prizren last summer and the people I met there said they appreciate Turkey's efforts. The Turkish language has widely been used by the Prizren people and the city's architectural style and cafes were definitely reflective of Ottoman style. It's very meaningful that President Erdogan made one of his speeches in September 2013 in this city strongly attached to Ottoman style."

'Turkey: The shield against religious extremism in Balkans'

Professor Dr. Metin Izeti at the University of Tetovo in Macedonia said, along with the increasingly effective influence of Turkey in the region, the religious and cultural activities of NGOs have become more visible, which annoys some people and has led them to carry out conflict-igniting activities among the people living there.

"As a result of this annoyance, they try to label Turkish foreign policy as 'Neo-Ottomanism,' " said Izeti adding, "I really can't understand what harm or danger Turkey's activities in Albania, Kosovo, Macedonia, Bosnia and Herzegovina, Bulgaria and Montenegro can cause in the region. It is obvious that they are sowing discord among the Balkan people who are grateful for Turkey's efforts to maintain cultural inheritance." "Unlike what some people have said, Turkey never forced their religion on the region. On the contrary, Turkey has always expressed its support in the face of violent groups which are creating a bad image for Islam, and tried to prevent their extremism from being spread among large communities."

"The presence of Turkey in the region," continued Izeti, "will definitely be the most important factor in the prevention of extremism. Turkey is a shield against religious extremism in the Balkans."
Last Update: Jan 26, 2016 1:13 am