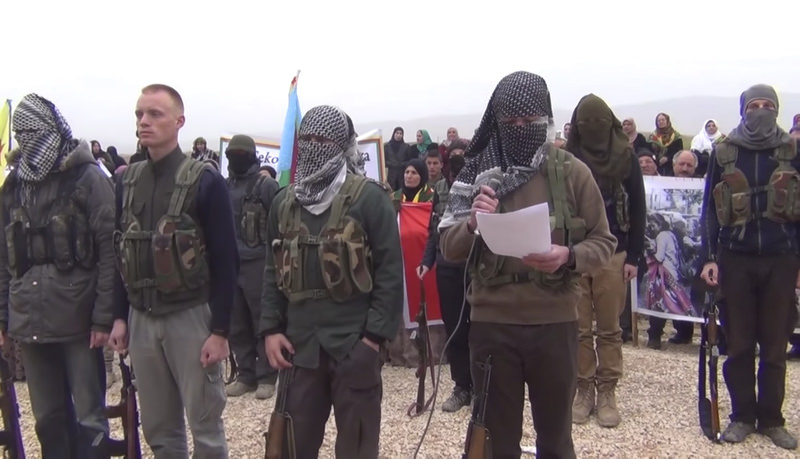 
A YouTube video has appeared of an English-speaking man, believed to be a fighter from the Democratic Union Party's (PYD) armed wing, the People's Protection Units (YPG) – an offshoot of the PKK terrorist organization – making a call for Westerners to join the ranks of the armed group and conduct terrorist attacks against the Turkish state.

The footage shows the man, with his face covered by a scarf while his rifle leans on his leg, making a statement to a group gathered around him, urging Kurds and Westerners to arm against the Turkish state. Beside the man also stands other western PYD members who are, reportedly, part of the PYD's international unit.

"Attack the institutions of the Turkish state all over the world. Come to Kurdistan and join the forces of the YPJ (women's branch of the YPG), YPS (the newly formed armed wing of the YPG in Turkey) and the guerrillas," the man says in the video.

Turkey has also been against the PYD being accepted as a party at the Geneva peace talks, which will be held on Jan. 29.

Meanwhile, Foreign Minister Mevlüt Çavuşoğlu said late Tuesday that Turkey has promised that the PKK-affiliated PYD will not attend the Syria talks beginning in Geneva on Friday and the Turkish government would definitely consider boycotting the meeting in Geneva if this pledge was not kept.

Çavuşoğlu's tough remarks came as the United Nations' Syrian envoy Staffan de Mistura found an intermediate solution by inviting the representatives of a Kurdish group called the Syrian Democratic Assembly (SDA). Çavuşoğlu, speaking on the NTV news channel, said the PYD was a terrorist group and that the legitimate Syrian opposition had no intention of sitting side by side with its representatives.

Russia on the other hand, a close ally of Syrian dictator Bashar al-Assad, has been calling for the PYD to be included in the opposition delegation.

Defending the PYD because it fights Daesh on the ground in Syria, Washington continues to read from a different page to Ankara concerning the PYD. Even though the U.S. says the PYD is the only effective force fighting DAESH on the ground, Ankara reiterates that there cannot be any distinction of good or bad terrorist organizations.
Last Update: Feb 18, 2016 1:41 pm