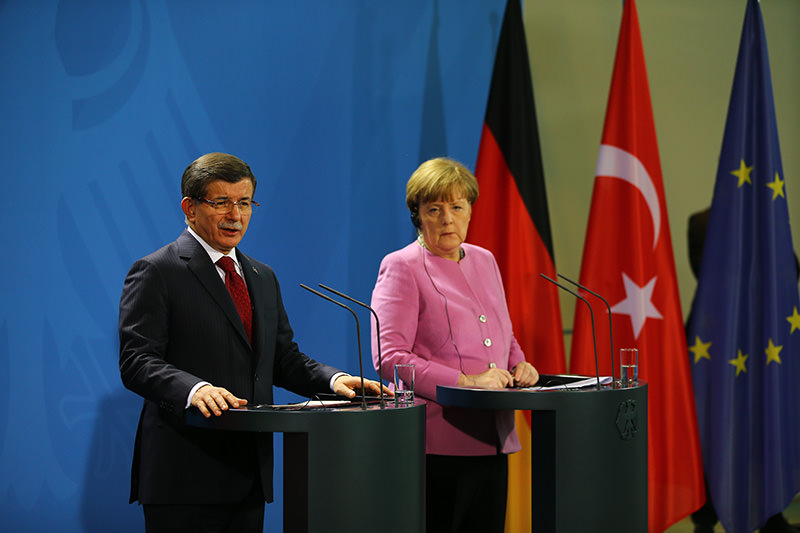 by Daily Sabah Feb 05, 2016 12:00 am
German chancellor Angela Merkel will fly to Ankara on Monday to meet with Prime Minister Ahmet Davutoğlu to discuss the Syrian refugee crisis and EU-Turkey relations.

In a previous meeting, Merkel and Davutoglu agreed on lifting visa requirements for Turkish nationals visiting the Schengen area by October in return for Turkey's help in stemming the flow of refugees to Europe.

Germany and Turkey have emerged as crucial players in the biggest migration crisis to rock Europe since World War II. The outcome of Friday's talks is not only important for Merkel, who faces intense pressure at home to impose a cap on Germany's refugee intake, but will also have resonance across Europe, where public opinion is hardening against a record influx of refugees seeking asylum.

Despite wintry conditions, thousands of people fleeing war and misery are still embarking on the dangerous journey across the Mediterranean to seek a better life in Europe.

Turkey is the country most affected by the refugee crisis and expects EU countries to share the burden, Davutoğlu told the German Press Agency (DPA) before his official talks in Berlin. "We are not begging for money from the EU. We have 2.5 million refugees in Turkey from Syria, 300,000 more from Iraq. Turkey has spent close to $10 billion on the refugees," he said. "There are many things to be done, together with the EU, together with the international community. But nobody can expect Turkey to carry the entire burden alone," he stressed.

At an EU-Turkey summit last November, the EU promised 3 billion euros ($3.28 billion) in aid to Turkey to support projects which would improve the living conditions of refugees in the country, and address the problems of the influx of refugees. But Italy has reportedly objected to the formula proposed for collecting the funding, which is planned to come from both the EU budget as well as from member states.

Davutoğlu said Turkey has taken initial steps as part of the EU-Turkey action plan agreed to in November, introducing visa requirements for Syrian nationals coming from third countries, and also opened the labor market to Syrian refugees in Turkey by allowing them to acquire work permits.

Davutoğlu said during Friday's intergovernmental consultations that the Turkish and German delegations will have detailed discussions regarding the refugee crisis. "But at the same time we will also be talking about how to fight against terrorism, about intelligence cooperation and regional issues in Syria, in Iraq, in the Middle East and in the Balkans," he said.

Germany saw an unprecedented 1.1 million asylum seekers arrive last year, many of them fleeing conflicts in Syria, Iraq and Afghanistan. Facing growing domestic pressure, Chancellor Angela Merkel wants Turkey to help stem the flow of migrants coming to Europe. She has urged other European Union members to make good on their pledge to give Turkey three billion euros.

Merkel said that she had obtained a pledge from Turkey to "do everything" to cut the record number of migrants arriving in Europe. Davutoğlu said that Turkey increased cooperation with the European border security agency Frontex, and expanded measures in visa regimes against third countries.
Last Update: Feb 05, 2016 8:07 pm
RELATED TOPICS