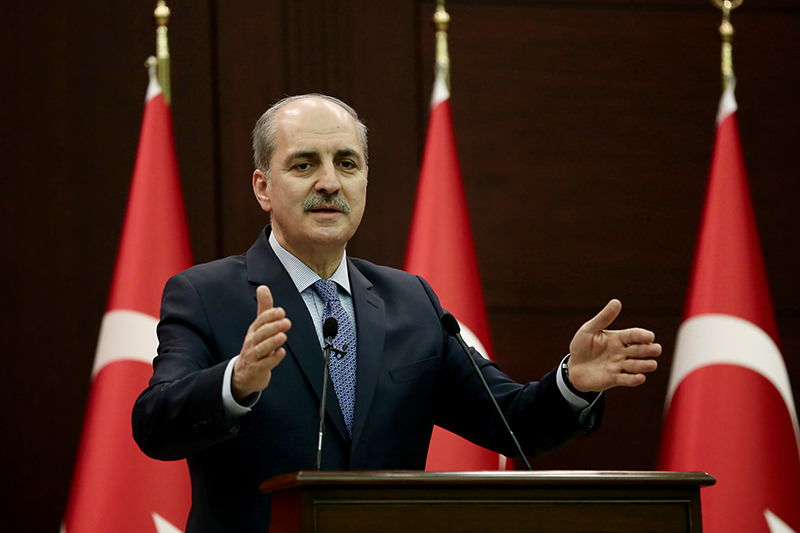 Deputy PM Kurtulmuu015f said some 77,000 Syrians are being given assistance in displaced persons camps in Syria along the border with Turkey. (AA Photo)
by Daily Sabah with Agencies Feb 08, 2016 12:00 am
Speaking after the weekly cabinet meeting, Deputy Prime Minister Numan Kurtulmuş stated Monday that Turkey would care for Syrians outside of the country "as much as possible" while a fresh influx of 600,000 refugees arriving at its border would be a "worst-case scenario".

Kurtulmuş said some 77,000 Syrians are being given assistance in displaced persons camps in Syria along the border with Turkey, including those who arrived recently.

With 200,000 refugees that have moved from areas near Aleppo towards the Turkish border so far, Kurtulmuş said that Turkey is on alert as the fierce fighting in Syria's Aleppo could prompt a mass immigration.

Kurtulmuş also added that Turkey's goal is to keep fleeing Syrians within the borders of their own country and provide them with as much as assistance there.

The fighting in the north of Aleppo province - sparked by a week-long Syrian regime onslaught with Russian air support- has forced tens of thousands of Syrians to mass at the Turkish border in recent days. The border has been closed for a fourth day.

The Turkish government has insisted for several days that its open-door policy to refugees fleeing the Syrian war remains unchanged and that it is ready, if necessary, to accommodate a new wave of arrivals.

"Obviously, as always, we will provide for our Syrian brothers and accept them when necessary," Prime Minister Ahmet Davutoğlu told a joint press conference with German Chancellor Angela Merkel.

But he added that his country, which is hosting some 2.7 million Syrian refugees, should not be expected "to shoulder the refugee issue alone."