Iraq's peshmerga seek $300M a month from US to fight Daesh 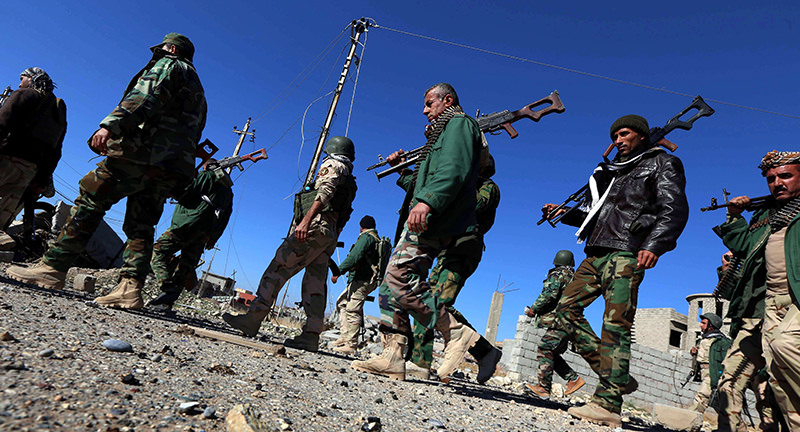 Iraqi peshmerga forces and fighters from the Yazidi minority, enter the northern Iraqi town of Sinjar, in the Nineveh Province, on November 13, 2015 (AFP Photo)
by Anadolu Agency Feb 09, 2016 12:00 am

The money is needed "for their salaries, and the logistics and the transportations for these efforts against Daesh," said Hemin Hawrami, foreign policy advisor to northern Iraq's Kurdish Regional Government President Masoud Barzani.

Hawrami, who spoke at the Washington Institute think tank, said the KRG is unable to provide basic needs for the peshmerga such as food and winter clothing, nor have the salaries of fighters been paid since September.

"We don't have that " he said. "The amount we can generate in Kurdistan region is $500 million. That's it for everything," he said of the total funds of his government.

He stressed that the peshmerga could defeat Daesh if the KRG would receive financial assistance from the U.S., which has responded in a "positive" manner to the issue. Hawrami envisions the peshmerga as building a force to confront regional issues.

Hawrami believes Daesh can be defeated on the ground and said peshmerga fighters were the only ground forces that proved able to beat the militants and clear areas.

"Daesh has not been able to take back one meter of the areas that peshmerga forces have cleared," he said.

Though the group has fought alongside Iraqi security forces, peshmerga forces complain of not having similar equipment of the Iraqis.

A spokesman for the Iraqi embassy in the U.S. told Anadolu Agency that Baghdad has never withheld U.S. military aid to the peshmerga.

"We continue to provide military and logistic support to all Iraqi forces that are battling Daesh including the peshmerga," said Ali Al-Mawlawi, adding that the U.S. understands the "importance of respecting Iraq's sovereignty," and coordinated with Baghdad any provisions of military aid.

Military aid aside, there exists political differences between Iraq's central government and the KRG.

A referendum will he held in the second half of 2016 to determine if the people of the Kurdistan region want separation from Iraq's central government, according to Hawrami.

Dictatorship and federalism has failed to find a solution between the Iraqi government and the KRG for more than 40 years, he said, and holding a referendum was "a new formula" for a peaceful solution.

"This new formula must be based on peaceful ways on dialogue ways and negotiations, talks with Baghdad," he said.

He acknowledged that it was not clear how the voting process on the referendum was going to take place because parts of northern Iraq is besieged by Daesh, where Iraqi citizens live.

Responding to Hawrami, embassy spokesman al-Mawlawi said that all political parties could express their political aspirations, but "the central government has a fundamental obligation to uphold the constitution".